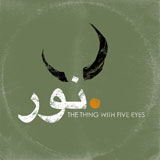 Calling your project The Thing With Five Eyes conjures images of drive-in ‘creature features’ and, consequently, MST3K. What it doesn’t imply is noir ambiance, jazz, trip-hop and glitch, which is what it delivers.

The first new project of Jason Köhnen following the demise of his mainstays The Kilimanjaro Darkjazz Ensemble and The Mount Fuji Doomjazz Corporation, نور (meaning ‘Glory’) delivers three tracks arranged as a triptych of sorts, depicting the past, present and future. Whether this is an abstraction or a hint at where the project is yet to go is a matter only time can decide, but viewed as a single work it makes for intriguing listening.

Amzha, the first and longest of these three cuts, opens with bright tones and the soft shuffle of digitised percussion, deconstructing and becoming fractured before a soaring melody kicks in, bringing with it a brief state of nostalgic euphoria for those who grew up with The Orb back in the day. It has that same sense of global unity that floated around trance in the mid-90s, faintly new-agey in its flavourings but Köhnen absorbs this vibe into his downbeat essence before it becomes trite. The track ebbs and flows over its eight minutes and by the time it reaches the half-way mark it has dimmed into self-inspection, adding to the Autechre-like beats with bursts of strings and deep thrums of sound that hint at the dark, minor-chord-heavy corners that it eventually crawls into. It could be the soundtrack for an ambitious short-movie, bristling with drama and tension while all the while remaining effortlessly cool, and it’s truly majestic in scope and execution.

Sanhkara, by contrast, is much more in keeping with Köhnen’s M.O., an eerie piece that starts out like a funerary jam session conducted in a cathedral crypt and ends with a breakbeat take on Angelo Badalamenti’s otherworldly swing. Where Amzha was a breathtaking exploration of sound, this conducts itself within the confines of an atmosphere of claustrophobia and dread, double-bass creeping through corridors of monastic drone and dreamy interstitial melodies. Even its sharp upturn towards its close has a dreamlike fugue state to it, a sense of confinement in more abstract terms but walls are walls, and they are closing in regardless. The fusion of breakbeat and jazz-noir aesthetics perfectly encapsulate Köhnen’s ethos thus far, developing his style and prophesising what may lie next.

If it’s anything like Meduxae it’s going to be dark. Very dark, as though his darkjazz past was executed in a spacious and moderately-furnished living room in the Algarve. Okay, not quite, but it does build upon past endeavours while adding an unsettling sheen. Maybe it’s the brushstroke snare that at times sounds like it’s being sucked into a void, maybe it’s the twinkling music-box melody that frames it in the eeriest of lights, or perhaps it’s the air of twilit doom that hovers above these sparse constructs, but the effect is that of a song teetering over an abyss. There’s a dread magnificence at work, and elegant though it may be, it makes for truly heavy listening.

نور could have re-treaded, or even further developed, Köhnen’s work with TKDE and it would have been an exceptional piece, but instead he has opted for something braver and therefore much more in keeping with his personal trajectory thus far. It plays with light in order to manipulate the shadows that it casts, allowing them to stretch and contort with the distinct flow of each of the three cuts, and to witness their brief, woe-begotten dance is a beautiful, though haunting, spectacle. All hail the new jazz. 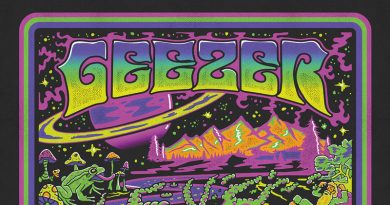