Howard Phillips Lovecraft. Where would heavy music be without him? Where would games, TV, and films be, for that matter? His influence is everywhere, whether you like it or not. Thankfully, a lot of people do really like it, which is why we keep getting juicy, fresh Lovecraftian releases.

Cadabra Records have been putting out exquisitely packaged spoken word records for a few years now, including a number of previous HPL releases: Hallowe’en In A Suburb And Others, The Hound & The Music Of Erich Zann and The Colour Out Of Space among others. All of these recordings have been read by Andrew Leman of the H. P. Lovecraft Historical Society, and this is also the case with their latest HPL release I Notturni Di Yuggoth. What is different though is that, whereas the previous releases have been scored readings – high quality audiobooks with very atmospheric soundtracks, pretty much – I Notturni Di Yuggoth has a bit more of a solid musical concept behind it.

Italian composer Fabio Frizzi is best known for his synth heavy horror film scores, and it was he who approached Cadabra Records with the idea of creating music inspired by Lovecraft‘s poetry collection The Fungi From Yuggoth. What he came up with were classical guitar notturnos based in the traditional concept of nocturnes (literally “night music”). Frizzi composed and recorded the eight tracks according to where the original poems took him, and then Leman laid down his readings following the music. It’s an interesting, and different, approach to sound tracking, with the composer interpreting the poems written rhythms and moods directly, rather than creating something to “sit behind” Lovecraft’s words. So, all that said, is it any good?

The opening track is actually a running together of the first two poems from The Fungi From Yuggoth. The Book – Pursuit begins gently and pleasantly – very much setting a scene and giving us the establishing shots of a story. It’s jazzy, sparse, and unhurried. The second half of the track (Pursuit) gathers pace, the music becoming more and more frantic and paranoid as the words do likewise.

Star Winds is all about inspiration. Music and words combine to paint a picture of a poet daydreaming out of a window; contemplating the stars in the heavens, and the autumn leaves blowing. A Memory’s otherworldly recollections turn by degrees from dreamlike to nightmarish.

The music and the words seem perfectly paced and every important line, every little twist, has its own accompanying trill or chord…

Night-Gaunts is probably my favourite track on the record. The driving composition, and the way Leman delivers his lines make it feel much more like an actual song, rather than poetry set to music. Nyarlathotep, by contrast, is probably the least effective, for the very same reason that this whole acoustic guitar interpretation of Lovecraft’s poems is kind of a risky business. The Fungi From Yuggoth alludes to beings and places from Lovecraft’s fiction, but the poems aren’t really much more than impressions. Quick, though masterfully done, sketches. Critics of HPL will often point out his tendency to somewhat over-describe things (especially things which he has already written are indescribable), but there’s little of that in the poems. This means that there is definitely room for the music to be used to add depth and drama to the less exciting or fantastical sonnets. Sadly, Nyarlathotep falls a bit flat. The music just doesn’t really seem to add anything to the words. It’s not terrible or anything, but it pretty much just sounds like what you’d imagine a Lovecraft poem set to acoustic guitar would, if you didn’t particularly like that idea.

Azathoth steadily builds a disquieting, maddening atmosphere as we journey from the astral void into the clutches of a demon. In St. Toads Frizzi uses harmonics to echo the chimes of the poem’s cracked church bell to great and eerie effect. The Familiars is a prequel to Lovecraft’s short story The Dunwich Horror, and is another highlight of the record. The music and the words seem perfectly paced and every important line, every little twist, has its own accompanying trill or chord.

All of this is just Side A of the record. Side B is all eight of Fabio Frizzi’s compositions without Andrew Leman’s accompaniment. It seems (to me) telling that the most listenable and impressive of these are also those which were most interesting with the words. Basically proving that Frizzi has so effectively turned the poems into music that the best, most interesting sonnets have also become the most impressive tracks in their own right.

Sonically I Notturni Di Yuggoth, is well crafted, interesting and enjoyable. Certain tracks do stand out above the rest, but then certain poems in a collection are always going to stand out more than others. All in all I Notturni Di Yuggoth is as solid and beautifully packaged release as we’ve come to expect from Cadabra Records. 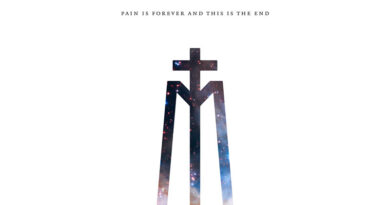 Review: Mantar ‘Pain Is Forever And This Is The End’