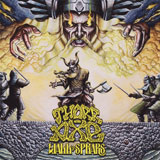 When I was 16 I was still listening to The Offspring, Blink 182 and all the other teen-pop-rock nonsense you get radio drip-fed at school, before eventually moving onto my first Metallica records. Ultra young Indianans Thorr-Axe (and in particular 16-year-old bassist Mitchell McKinney) show on this their debut full length that they are at least 500 times more metal than I was at that age with a crushing rifforama that boldly sets all axes to bludgeon-mode. On listening to this surprisingly crisp and raw onslaught of adolescent volume, it’s hard not imagine the trio raiding the treasure troves of Sleep, High On Fire and Eyehategod records lying around their older brothers bedrooms in giddy triumph.

Thorr Axe comprises McKinney on bass along with guitarist/vocalist Tucker Thomasson (aged 20 at the time of recording) and Travis Roach (also 20) behind the kit (although since recording ‘Wall Of Spears’, Roach has parted company with the band who are actively seeking a replacement). Put simply, this 9-song showcase is a feast of continent-sized riffs. Imagine The Sword taking on Amon Amarth for a late night Dungeons and Dragons battle with Matt Pike on hand to drink beer and advise The Sword on its strategy and you’re pretty much there. After releasing what has to be said was a pretty poorly produced demo EP last year entitled ‘Roots of the Mountain’, the mighty ‘Axe have re-recorded it’s 4 anthemic tracks, which sit at the stern of ‘Wall Of Spears’, and have added fresher meat to the album’s bow. With the riffage and the macho concept in place they’re all set to sail the seas, pillaging the bounty of the heavy metal gods as they go.

For such a young guitar-player in a scene of older, crustier bruisers, the power and the style lying behind Thomasson’s riffs are both incredibly self-assured. The likes of sledgehammer intro track ‘Raise Your Horns’, the proto-thrashing title-cut and the doomed crawl of ‘Hung For Nine Days’ sound like they’re blasting out of a speaker-laden battleship in outer space straight down to our puny mortal ears. The big differences between the older tracks from the original EP and the newer efforts are the addition of further galloping Iron Maiden rhythms and Thomasson’s increased harmonic skills on the likes of ‘The Island’ and ‘Wall Of Spears’ which I hope come to bear more fret-melting fruit on future releases.

I’m still a bit gutted that the title ‘Wall Of Spears’ doesn’t arise from the concept of lining up multiple Britney clones for a raunchy rendition of ‘Toxic’, but I suppose Vikings, axes, beer and wizards will have to do. It’s a well-used lyrical theme, but it works well with the riffs slamming down like oars against Nordic seas and the image of wizards marching en masse to the sound of the thundering basslines is pretty cool. Ralph Walters does a great job on the cover art too with his retro, yet cheesily-detailed take on a mega-angry Viking shakedown.

This is however not a perfect debut despite the delicious cocktail of riffing prowess. By putting old EP tracks at the back of an album, Thorr-Axe have included two short thumping intro songs on one record in ‘Raise Your Horns’ and the magnificently-titled ‘March of the Wizards’, which somewhat leaves the feeling that this is two EPs rather than one fully formed album. Some of this is well adjusted however by the addition of exciting new stomper ‘Hall Under the Mountain’ in the midst of the EP tracks. It also must be said that the vocals still need some development work. Thomasson’s desperate rasp starts off with a heroic roar over the wall of amps, but then deteriorates like the cookie monster slowly running out of cough sweets until he is eventually drowned out by his own riffs on ‘Sundering of the Frost Giant’.

With all that said, if you don’t have the riffs you can’t come out to play and Thorr-Axe play theirs with such triumph and passion that they will be impossible to ignore if they continue to produce such face-crushing leads. Sleep’s ‘Volume 1’ preaches that if you have the guitar-work and ideas down then the rest will follow and I have every faith in Thorr-Axe to realise their dream as long as they focus hard on a firm direction in which to progress. This is a band with the balls and the chops to go far and its young guns like Thorr-Axe that give me faith that heavy metal’s future is in good hands.