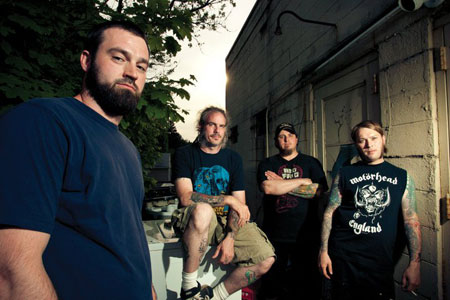 In honor of RUE‘s anticipated new full-length, Thorns, being officially released, Pitchfork Media is hosting a brand new track from the pummeling album. Dropping nearly six-and-a-half minutes of some of the most primal yet diversified riffage from the outfit to date, “For Thousands Of Years” is a prime example of why RUE are a cult favorite within the doom and sludge scenes. Check it out right here.

Previously, the track “Brown” was released via The Obelisk, and is still streaming here.

The first RUE full-length to hit the streets in nearly eight years, Thorns is being released by longtime band cohorts Shifty Records, responsible for unleashing basically all of RUE’s previous releases to date. The record has gained massive praise from respected media outlets in recent weeks, from virgins to the band’s ultra-aggressive hymns, as well as writers who have waited seven years since raging about the previous album. Thorns is available for direct purchase at this location.