The Legacy of Scott “Wino” Weinrich in the world of heavy music is indisputable. Now he teams up with fellow Conny Ochs, a songwriter so pure and honest in his output that he seems to be the perfect partner. Both met for the first time in 2010 when Conny was supporting Wino on his acoustic solo tour promoting ‘Adrift’. Through music they discovered a very similar approach to life and art and a shared wisdom in creating music. It really seemed like two souls becoming one after they have learned to know each other. And here is the result: 11 soulful tunes that speak for themselves, personalities shine, truth within. All songs got written and performed by Wino and Conny together. The album contains one coversong by Townes Van Zandt. The artwork contains drawings by both artists and follows the dedicated and deeply intense approach of the whole album. 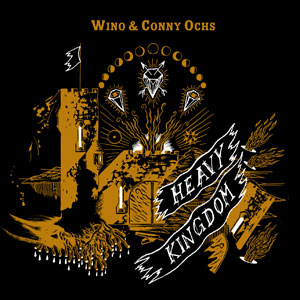 “Heavy Kingdom” will be released by Exile On Mainstream throughout Europe on January 27th, 2012, a Record Release Party will be on on January 13th at Berlin’s Red Rooster Club and a massive European Tour will roll in March/April 2012.

Read more info over at Exile On Mainstream HERE.