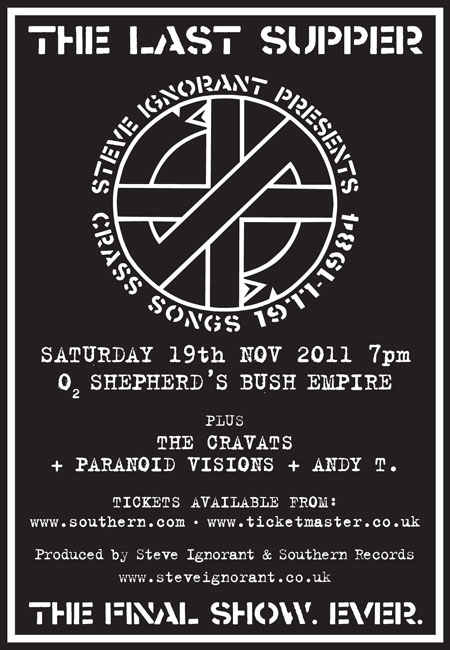 In 2007, as a personal tribute to Crass, Steve Ignorant performed a show at Shepherds Bush Empire called ‘The Feeding Of The Five Thousand’, a celebration of the Crass album of the same name, which was performed in its entirety. Answering the calls that have come from around the globe in response to the Shepherd’s Bush gigs Steve Ignorant has been touring ‘The Last Supper’ across the UK, Europe, US, Canada, Australia and New Zealand to rapturous audiences, celebrating the period of Crass’ work with which he feels most closely aligned – the period when he feels the band were at the strongest, most productive and most hopeful.

In November 2011 Steve Ignorant and his merry band of musicians comprising Gizz Butt (guitar), Pete Wilson (bass), Spike T Smith (drums) and Carol Hodge (vocals) will be performing the Last Supper for the last time, deliberately and significantly to be held once again at the 02 Shepherds Bush Empire.

This will doubtless be the last time any member of Crass will play these songs live again. Ever.

The Cravats
Formed in 1978 near Birmingham, England, these dada fuelled, Jazz-Punk colossals soon became firm John Peel favourites with their unique brand of sax-riddled, bass-laced punk weirdness, doing 4 sessions for the great man and releasing numerous records on Small Wonder, Crass, Corpus Christi and most recently the double CD retrospective, ‘Land of The Giants’ on Overground Records, who, in January, are also re-releasing the band’s first 1978 LP, ‘The Cravats In Toytown’ on CD, as well as a brilliantly crafted new creation culled from the original ‘In Toytown’ master tapes by Penny Rimbaud of Crass, which one described as, “. . . Like an English Stately Home garden landscaped by Jackson Pollock.” The live band features, original founder and voice, The Shend (The Cravats, The Very Things) as well as legendary Cravats sax behemoth, Svor Naan along with Rex Speedway on fuzz club guitar, Rev. J. Noble on bass and Rampton Garstang, the tree-bending sticksman. Eccentrically frantic on stage, odd but on the ball and definitely not normal.
www.thecravats.com

Paranoid Visions
Formed in Dublin in 1981, Paranoid Visions quickly allied themselves to the anarcho punk fraternity of the second wave of punk rock in the early 80’s. Heavily influenced by the Crass ethic of DIY music, the band formed their own F.O.A.D label and licensed their records to All The Madmen, home of the Mob, Thatcher on Acid, Blyth Power and the Astronauts. The band are currently completing their new album, entitled “Dichotomy: White Sands / Black Earth” for release in early 2012. the album features contributions from the Cravats’ The Shend, TV Smith, Goldblades’ John Robb and US punk band the Blame. A single (featuring TV Smith on guest vocals), “Outsider Artist” will be released to coincide with this show with Steve Ignorant, the bands largest London gig to date.
www.facebook.com/paranoidvisions

Andy T
Andy T. began writing poetry/lyrics around the mid 1970’s encouraged by the free festival scene which had a lot of roots and branches in Rochdale. Andy became friends with Crass, attending a lot of their gigs around the country. They were expressing similar feelings that he related to. He had been sending cassette tapes of his poetry and music to friends for quite a while. Crass decided to release a bunch of tapes they had received from all over the country as Bullshit Detector. Andy had something to do with 5 tracks on the first one. Andy T’s music has been described as ‘Joy Division meets Killing Joke at a dub reggae party, with a fat, old bloke shouting over the top’. It probably sounds like nothing you’ve heard before, please feel free to decide for yourself. 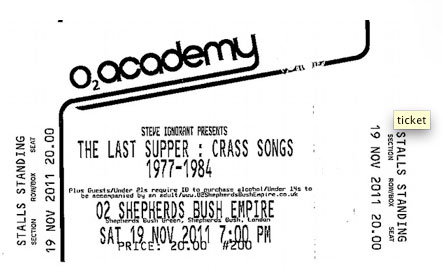 “So here it is then – the final date for the final gig, it’s so weird looking at it knowing it’s going to be the last time I ever perform Crass songs live on stage. I know that was the idea behind this Last Supper tour, but to see it in black and white in front of you like this really makes it final. I know that every gig I do is special and that me and the band put 1000% into every performance, but I have to admit to you all, this one will be special. 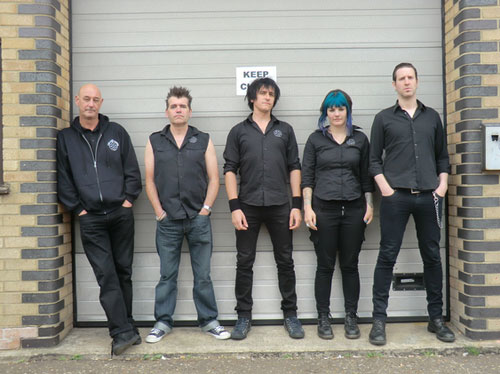