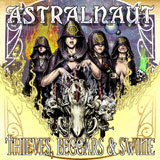 At this point in time for the musical spectrum there is no shame in a band wearing their influences on their sleeves; the Stoner/Doom scene has experienced a boom in recent years and as a result a large portion of bands that come to my attention via The Sleeping Shaman owe more than a passing debt to a band formed in Birmingham, England at the tail end of the 1960’s. So if you were to dismiss one band for resembling another then the majority of the music industry may as well just pack up and go home.

Hailing from Co. Armagh, Ireland Astralnaut have been gaining favourable nods of approval now for a the last few years thanks to the release of their debut EP Back To The Bog and last year’s follow up In The Gaze Of The Gods. They have also toured with heavyweights such as Red Fang and Black Magician and have not been afraid to tear up the road in pursuit of their goal of making hard hitting, fuzzed out rock and roll.

It would seem that for their muse they have channelled the gruff rambunctiousness of early Clutch – the Shogun Called Marcus era rather than the slick Earth Rockers of today – and the hardcore seventies influenced rifforama of supergroup Down into a doom/sludge soup that is high on the grim and heavy on the Richter scale.

There is no denying the passion as Ego Eccentric crashes out of the speakers with a rolling, stomping, head nodding refrain, full of buzzing guitars and a swaying feel. The rhythmic plod is augmented by Thomas Mallon’s throaty roar and on point confrontational lyrics that bear a resemblance in diction and inference to the early voice of Neil Fallon with a clean, but coarse bark.

As the track rumbles on there are some nice jam passages and a cool solo courtesy of Gaz Treanor before a standard breakdown and race to the finish. It is definitely not reinventing the wheel, but encompasses the trademark gritty rock and roll of the Stoner genre and certainly won’t have you reaching for the skip button.

Mac Tire (Or Wolf in Irish) is a Southern rock style mash up that combines the skills previously on display with an epic, sprawling, slow burning feel. It stomps and snarls and spits the bands message, prowling like a wounded Canis Lupus before leading into a good solid melodic passage that shows the band don’t need an ‘heavier than thou’ attitude to get their message across.

The middle track is where the band start to see the wheels come off a little for me. There is nothing negative I can really put my finger on as the band rock along with the same delivery and conviction, but the track meanders, becoming a tad formulaic and feels like they are going through the motions at times. However it ends well as it breaks out into a nice groove about a minute before the end and saves Neopium from drifting off into a chemically induced haze.

Utopian Dawn attempts to wrestle the attention back and here Astralnaut switch things up and get back to their more muscular ways with an Irish take on the big open chord feel that Down made their own on their sophomore record. Here multi-layered vocals collide over the back ground of the rhythm section as they concentrate more on building an atmosphere than going straight for the jugular.

Finally Dethroned ushers in a slice of heavyweight Doom. An ominous opening riff is backed up by JonJoe Harrison’s grinding bass and the track builds to a powerful anthemic feel that picks up dramatically in the second half and ends the EP like a charging rhino.

Astralnaut are something of a conundrum for me; there are moments when they threaten to be sublime, yet somehow I feel they fall just shy of capturing the magic ingredient to make them stand out. With the football season upon us it is almost appropriate to roll out the phrase ‘on paper’ and ‘on paper’ Astralnaut have all the right ingredients; they are a talented band and certainly seem to appeal to plenty of people so they are not exactly relegation fodder, but in the burgeoning Stoner/Doom scene they could well do with adding a bit more authenticity to their sound to raise themselves above the Mac Tire pack.