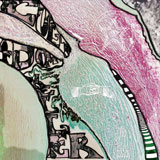 Their new record ‘The Second Bardo’ is absolutely stunning – wall-to-wall, cover-to-cover trippy clout and heft and sinister brown-acid vibes that’d scare the shit out of Wavy Gravy. Their titanic grooves are reminiscent of Spacemen 3, Loop, Brian Jonestown Massacre, Wooden Shjips, Psychic Ills… but there’s enough originality and sheer power here to entertain even the most jaded space cadets. They take the standard psychedelic touchstones – Hawkwind, Faust and even bits of Jefferson Airplane – and rough them up and grease them down to make a potent strain of space-rock that can give you a contact high after a few seconds. That good, folks, the new record is that good.

The rolling, chiming opener ‘Plague Of All’ crackles with an intense, pulsing vibe – ringing guitar and pounding percussion set the controls for the heart of the sun. Think Black Angels jamming with the Dead at midnight and you’re close – there’s an ominous, shambling motorik vibe going on that’ll rattle your head and move your hips. Fuzz guitar is tempered by the vocals, which are laced with spectral reverb. Groovy!

Epic instrumental ‘The Snake Keeps Changing’ (what are they on and where can I get some?) has a blissed out shoegaze sound embellished with piercing keys and woozy guitar sounds. Next tune ‘Dead Seas’ crackles and fizzes and it’s plodding, thunderous rhythm is enough to shake any residual mental cobwebs loose.

‘Into the Sky Volcano/Beyond Burning Skies’ is one of the trippiest numbers I’ve heard in years (and I make it my business to hunt this stuff down) – it opens with back-masked Eastern-style sounds, then mutates into a titanic space beast that rolls and lollops over your senses like you asked for it. It’s the most Loop-like of the tracks here – anyone who’s had experience with those Cosmos-shaking warlords needs no introduction to the flavours you can find on this record, but those that haven’t would be advised to check them out immediately.

The musky over-driven, pounding feel of ‘Heavy & Dead’ (Original Version) is a delight but what follows, ‘Godshaker’, is my one of my favourites: it’s a roaring, booming number. It’ll have your head nodding, your eye-lids closing, your mind trying desperately to escape its feeble cranial prison. Howling keyboards and serpentine bass combine with a star-gazing guitar jam to potent effect.

‘Ghost Bones’ sounds like the bastard son of Psychocandy-era Jesus and Mary Chain and THC, such is the charred feedback-ing and distant vocals. They bring back the rubbery, stoned motorik for the title track – it’s reminiscent of Faust and the Massacre in equal measure, such is the unhinged, demented squall going down.

‘Killer In My Sleep’ closes the record, and it’s completely bizarre: the only tag I can think of for it is Wild-West-echo-Psych. Sizzling, popping noise crashes against twanging Southern-fried twanging – with a hefty dollop of reverb to boot.

Only God knows why it’s taken this long for the true successors to the hallowed names I mentioned above to reveal themselves, but The Cult Of Dom Keller are your men. No doubt about it. There’s no filler, there’s not one misstep, it’s all a chaotic blend of scorching psychedelia and blistering noise that’ll still be echoing around your brain hours after the record is over (especially if you do what I did, and listened to it again.)

Julian Cope has sadly stopped recommending new records, but if he’d kept it going another month, ‘The Second Bardo’ surely would have satisfied that Cosmic Trickster.

If Sleeping Shaman gave marks out of ten, this would be a solid ten, no question about it. Buy it, dig it, roll one up and smoke it!