I’ve seen some dire predictions in my social media feed about the future of the arts in the post-pandemic world: warnings that funding for the arts will be non-existent, and claims that small business will essentially cease to exist. Our favourite venues are suffering, and our favourite artists aren’t gigging. Is it the end of rock’n’roll? Nope.

History is replete with examples of compelling art coming from grim circumstances. The darkness and cynicism of Film Noir were born from the destruction of WWII, and the distinct visuals were a product of the rationing of raw materials, including electricity. You can all think of examples of creativity and generosity happening near you. Here’s something cool from my town.

Anthony Moore is the Big Cheese of Desert Highways, a Melbourne record label / online store / management / booking / you-name-it operation. A while back he had an idea: put together a small compilation to spread some musical happiness in a shit time. That small compilation turned into a worldwide multi-genre monster that he eventually had to cap at 205 tracks. As soon as I heard about it, I knew I wanted to write about it, but there’s no sensible way for me to review this behemoth. Instead I asked Anthony a few questions about the hows and whys of putting it together.

When and how did you come up with the idea?

Originally, I was going to put a compilation together of Desert Highways songs, something to do on the weekend and share some love. It was always intended to be a free download to try and give a bit of an escape to people going through isolation at the moment. Then I thought I might as well throw it out to the public and did two posts on my personal Facebook page towards the end of March. Got a great response quickly. So, I thought I would message others. It quickly turned into a massive project. Lots of people are side-tracked with what’s going on in the world, completely understandable, but a lot more musicians expressed interest in including a track on the compilation than the amount included. I had to cut it off though just to get it out there.

How long was it before you started getting submissions, and how long before you realised it was gonna be big?

I started getting submissions straight away, as soon as I put the first public post on my personal Facebook wall and it grew very quickly!

How many submissions did you get, and how did you choose? (or did you get exactly the number you put on the comp?)

As I said, I got a lot more interest than the amount in the finished compilation but had to just get it finished and out there. I am still getting messages asking to be included, but it’s up and running so it’ll stay as is. Whoever wanted to contribute, was included.

Roughly how much time did you put in to compiling it? Was there anything else interesting about putting it together?

I couldn’t tell you how much time went into it, but anyone that works in music, or is in a band, would know that it was an absolutely massive amount – which I knew would happen pretty quickly. I wanted it to be something special, to give people something to go WOW over and know that all these bands have taken the time to submit something they put love and energy into, and they’re putting it out there to share some love, to give a little something back.

There was a lot of following up (people have a lot on usually, but especially at the moment), compiling all the information, uploading into Bandcamp (I even checked with them to see if the compilation would ‘break’ it 🙂 ), putting everything into the PDF etc. But I’m stoked with how it turned out.

I wanted it to be something special, to give people something to go WOW over and know that all these bands have taken the time to submit something they put love and energy into…

You noted your personal highlights on the PDF – Was there anything else surprising, like location or style/genre of bands?

Firstly, and not being biased, but every song on there is awesome. Just how it turned out. A lot has gone into each and every one of them. A lot of people would know a lot of the bands, but at the same time a lot people wouldn’t as well. I wanted to bring some attention to the new and unreleased tracks, as well as point out to people that may know not the bands, some of the members that may be more ‘well known’ from other bands they’re in / have been in and to help connect some dots. That said, as you’d know, talented musicians aren’t always famous, and I keep pushing this, but each and every song is worth checking out.

There are a lot of various styles, but all have something special. I’m really impressed with the quality included. I also haven’t just put this together and thrown it out in the world, I have been listening to the songs as they came through and have been playing them since. This is something I’d want to download, and am stoked on the massive positive response it’s had from all the bands, publicists, labels, the artist, and punters who have been downloading and streaming it.

I haven’t really answered the question properly have I? I’m stoked that it turned into an international compilation. Some bands included from places we may not always hear music in these genres from, but of course it exists, like India (Diarchy), Indonesia (Madé J) and Turkey (Hayvanlar Alemi). One band was unsure if their song would ‘fit in’ to what was being put together, both style wise and also length. That is KlavierKrieger. There are some longer songs on there, but this experimental track goes for 17+ minutes. I quite dig it. And as soon as I heard it knew it had to be the ‘Hidden Bonus Track’. I do wonder if people will get my sense of humour about having a hidden bonus track on a digital only compilation 🙂

Thanks mate now here’s my review: It’s huge. Turn it up loud and forget your troubles for a few hours – you might even discover a new favourite.

The behemoth No Gigs Does Not Have To Mean No Music, featuring a mammoth 205 tracks, with a running time of 17 hours 14 minutes, is available now as a FREE download via the Desert Highways bandcamp page. 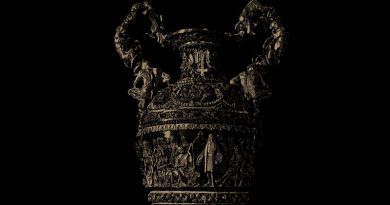 Review: Mastiff ‘Leave Me The Ashes Of The Earth’