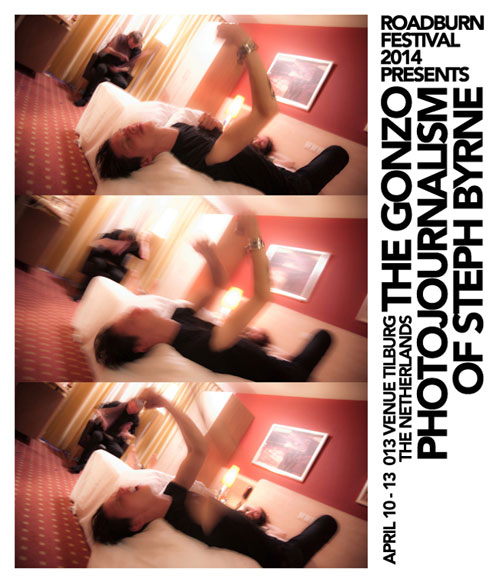 In addition to paintings, drawings, poster art, video and backdrop projections, Walter & Co will also showcase photography at this year’s Roadburn Festival. It’s definitely an integral part of the festival, too!

From the very beginning, Roadburn’s signature identity was created in part through visual art. This year, they are thrilled to host an exhibition of Steph Byrne’s gonzo photojournalism at the 013 venue. Her work captures the essence of Roadburn in every aspect, artistically and physically.

Whereas most photographers point their lenses at the stage, Tilburg’s Steph Byrne (1985) looks the other way, roaming the corridors of the 013 venue or joining the fray at the front of a packed Green Room, making friends along the way. She strolls through the affectionately nicknamed Weirdo Canyon around the corner from the 013 venue, ending up at hotel room parties or somewhere on the streets of Tilburg, sharing drinks, stories, hugs, and smiles with kindred spirits.

Steph’s perspective on Roadburn is uniquely her own. Looking at her pictures, you’ll experience the festival in a whole new way. Virtually unedited and often slightly out of focus, her vibrant photography pulls you into the action. Suddenly, you are in her shoes, travelling everywhere she goes over the course of the festival.

Experience Roadburn Festival through the eyes of Steph Byrne and her gonzo photojournalism. Her pictures will be on display from April 10th to April 13th at the 013 venue in Tilburg, The Netherlands.