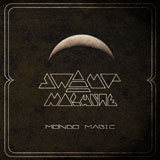 It seems as if these days the most well travelled roads to the world of “heavy” are firmly rooted in all things 70’s, be it groove, riffing style, ambience, or lyrical inspiration. This is not necessarily a bad thing…it’s that same reconstituted 70’s doom and groove that keeps me coming back to albums like Cathedral’s ‘The Carnival Bizarre’. But if too many bands do too much of the same thing, it becomes derivative, monotonous, and boring. Herein lies the beauty in a band like Swamp Machine who, while keeping their finger on the pulse of 70’s boogie, maintain a jazz sensibility that’s ever present on ‘Mondo Magic‘s six tracks. In fact, Swamp Machine have managed to find that certain ‘something‘ that separates them from the pack, and adds an extra dimension to a tried and true method. That’s not to say that incorporating jazz elements into traditional song structures is something new…it’s just that few bands pull it off. Swamp Machine succeeds to astonishing effect.

The album kicks off with the near 10 minute ‘Aghori Ritual’, a doom track by any definition, given a particularly expansive feel by the judicious use of reverb and other subtle effects. Imagine Acid King’s ‘Carve The 5’ with an infusion of harmonic minor solo work and you get the picture. All of these elements give the track an otherworldly feel, creating an atmosphere that is both mystical and oppressive. Swamp Machine hone in on the essence of impending death, and they twist the knife (very) slowly. Several minutes in, they mix it up with a mid-tempo blues break, jarring the listener (in a good way) out of the trance inducing effects of the intro. And this is the first of many great examples of intelligent song writing on this album. If you are ambitious enough to attempt the 10+ minute track, well-calculated “detours” (unanticipated riffs, improv solo work, etc.) are one good way to keep the listener’s attention.

They continue with ‘Webs And Spirals’, a track that begins to flaunt some of the aforementioned odd rhythmic time signatures inherent to jazz and other progressive musical styles. The song title is pretty befitting given Swamp Machine’s emphasis on circular drum patterns throughout…an effect that creates a dizzying feel. This concept of form/song structure intentionally reflecting lyrical content/written word displays depth and an artistic sensitivity that is not only unexpected, but also just plain cool. Beyond the experimentation, the song is downright badass and still keeps the blues coming.

Next on the list is ‘Burning Road’, which begins with a quiet intro of light guitar picking and then comes crashing down like a 20-ton rabbit, hopping along obliterating everything in its path. Don’t let the weight fool you, this rabbit’s got props, with spot on timing and a technical prowess matched by few in the genre. Koen van Soelen’s soulful vocals compliment the music especially well here, bringing to mind some of the classic, more blues oriented material by Grand Magus. With each successive track the Dutch trio expands on the blues/jazz theme, incorporating solo work that often mirrors the free form nature of the rhythm section.

The progressive flourishes culminate in epic follow on tracks, ‘Gone’ and ‘Skull’, the latter being the superior of the two both in composition and the ability to fully realize its respective potential. While the former reels the listener in with a smooth, psych-blues intro, the song spends the final few minutes with a repeated chord progression that promises more than it delivers. Conversely, ‘Skull’ patiently builds, capturing the same sense of foreboding evident in the first minutes of the album. What’s impressive here is that Swamp Machine achieve this feat by using subtlety to their advantage. It’s the contrast of quiet prog-rock noodling and the full on anvil assault eventually achieved that make this song an album highlight. The album closes with ‘Battle Lost’, a quiet, melancholy piece that gives the listener some introspective downtime.

While not a classic album in the true sense, Swamp Machine‘s ‘Mondo Magic’ is an impressive effort nonetheless and possesses enough surprises to keep the more adventurous Sabbath worshipers fully devoted. Recommended. 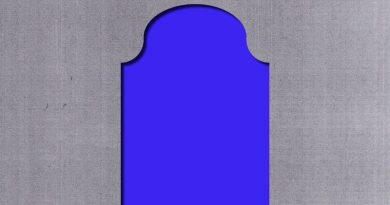 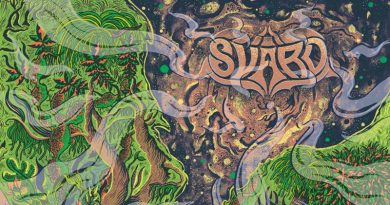