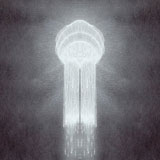 First up, Sun Splitter, offer up a take on fuzzed-out doomy metal that approaches from an oddly mechanized direction and comes off sounding and feeling like the bastard offspring of a twisted three-way between Earth, circa ‘Extra-Capsular Extraction’, Thrones and, to a lesser extent, Agoraphobic Nosebleed.

Their track ‘Plum Blossom’ opens with a herky-jerky, slightly angular, crossover-style riff backed by a drum machine before going all psychedelic and trippy on us with a descending guitar riff sat atop squalling fuzz and Michael Gira-esque vocals. That drum machine keeps a minimalistic tattoo, just like on that early Earth material, before going full-on blasting double-bass and kicking into Thrones territory with a heavy doom-laden bassline. A soupcon of Black Metal rears its head too in the shape of a needling tremolo guitar part that soon submerges into the deep, murky depths of that Thrones-style hypno-chug and a vocal part mostly consisting of distorted agonised yelling. The big surprise comes at the end when the Anb influence makes itself strongly felt by bringing the crossover riff back in and giving us a hell-for-leather chainsaw guitar and ferocious double-bass drum-machine attack in those final seconds. Talk about going out with a bang! A fitting end for such a smashing oddball of a number if you ask me.

Now, over on the flip-side, Bridesmaid give us the all-organic goodness of ‘Vilkin’ It For All It’s Worth’, a nasty lurching li’l distorto-fuzz number that comes from the Melvins/Buzzov-en/Godheadsilo school of low-end thuggery. Two thick ‘n’ woolly basses take the helm here, a-lunging and a-pounding, whilst some caveman smashes a drumkit into submission and tries to match them decibel for decibel.

Five minutes long but it feels SO much shorter, thanks to Bridesmaid’s firm grasp on the dynamics of how to keep an instrumental interesting – they just twist and turn and batter yer ears with their vaguely mathy AmRep-ish noise-rock bludgeon. Good stuff.

Definitely one to pick up if you’re a fan, as I am, of Sun Splitter’s previous cassette releases on Land Of Decay, and a cracking introduction to the filthy sound of Bridesmaid too, and all wrapped up in a lovely cover too!