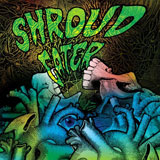 HEY YOU! Yeah, you with the Melvins t-shirt and the High On Fire LP under your arm…wanna hear somethin’ new and totally killer? Wanna hear some dude cavemanning the fuck out of his drums, while depth-charging bass rampages under dirty, nasty FILTHY dark fuzzed out guitar? Wanna hear some of the ballsiest female vocals these ears have heard in many a year? YOU DO? Then you NEED to hear SHROUD EATER!

Formed in Miami, Florida, earlier this year, and comprising of Jeannie Saiz on guitar and vocals, Janette Valentine on bass and thundering powerhouse Felipe Torres on drums, Shroud Eater follow in the proud tradition of heavy as lead metal merchants from the area such as Cavity and the mighty Floor, adding a touch of the darker side of grunge and a hint of AmRep style noise-rock into the mix to create a tasty stew of scorching-hot filthy ROCK.

Straight out of the gates, Shroud Eater grab you by the balls and rock the shit out of you. Opening track ‘We Are Beasts’ sure makes it SOUND like we’re dealing with ravening wild beasts, such is the ferocity of the attack. These songs have a sound and a feel that just totally GRIPPED me from the first listen, and continued to do so on the 10th listen. Hell, I’m still listening to ’em NOW, and wanting to hear MORE.

When I mentioned High On Fire at the beginning of this li’l screed, it was mostly down to the totally RIPPING rhythm section that both HOF and Shroud Eater have – Torres gives us that total rolling, pounding Motorhead-style THUNDER-MACHINE that Des Kensel also gives to HOF. I am in LOVE with the drum sound here – none of that ‘clickety-click’ triggered double bass horseshit, this is low-down NASTY pummelling, as is the sub-sonic low-end bass groove emanating from Valentine. No-nonsense, no frills BASS. Its one HELL of an engine room for Saiz to riff and rile the fuck out to…..and riff and rile she DOES. FEEELTHY fuzzed-up angular, DARK, stoner-rock riffage and ballsy, throaty yelling are Saiz’s forte here, and she delivers in SPADES. Aces, even. Heh.

As for the actual songs themselves, MOLTEN opener ‘We Are Beasts’ manages to combine a groove similar to that of HOFs ‘Cometh Down Hessian’ with a grungy, discordant, angular edge reminiscent of Voivod (Yeeeeeeah, I KNOW, I always manage to get Voivod into every review somewhere…let it GO guys!) and even a touch of the whirlwind guitars of Sonic Youth circa-‘Death Valley ’69. Second track ‘Vesuvius’ gives us more of that dark discord, MORE of the CRUSHING drummage and a lurching feel that just really floats my boat in a BIIIG way.

Now….track 3 is where I have one, and only one, minor niggle with the band. Jean, Jan, Felipe – WHY did you have to put an instrumental track on a 3-track demo??? Don’t get me wrong, its a good track, a little speedier than the other 2, riff-wise, but I just never feel like I’m getting what I want to hear from a new band when they include an instrumental on their debut release, if you know what I mean? Maybe its just me, but HELL, I wanted more of Jeannie’s KILLER vocals. But, FUCK IT, Its still a solid track.

When all is said and done, I am LOVING the FUCK out of this band and this EP in general, despite the minor niggle – which is clearly one of personal taste. Oh, and mention must be made of Jeannie’s fantastic artwork also. Seriously, this band has EVERYTHING right now, but mostly it has my undivided attention. Lets hope that some of the more tasteful record labels out there are ALSO paying attention, GREG ANDERSON, I’M LOOKING IN YOUR DIRECTION – RELEASE A FULL-LENGTH SHROUD EATER LP.