One of the things, let’s face it, that we all love about music is its’ transportive power – a good song or an album can often put you in an imagined location when you close your eyes, whisk you away to somewhere else entirely. – whether it be the fantastic cosmic realms conjured by prog or power metal, or the back streets of the Bronx via some nasty hip-hop. It’s a conjurer of a non-physical spaces that when accessed feel almost like you’ve physically spent time there. So with that in mind, the most accurate summary I can give you of the etheric location Khost‘s Buried Steel put me in was that of maybe waking up handcuffed to a radiator in a damp, asbestos -riddled factory on an abandoned industrial estate somewhere. With two balaclava wearing shadows at the far end walking menacingly towards me. Wielding pliers.

The duo of Andy Swan and Damian Bennett are 7 years into their quest for the ultimate in metal machine music and on this new album they’ve hit on a particularly unpleasant strain. Coming across like Tetsuo The Iron Man forming a band after digesting the collected works of Winter and Sutcliffe Jugend at times, there’s little to none of the ‘groove’, the meaningless term industrial metal might suggest if I threw it at them. So I won’t insult them by doing so because there’s so much more than that overly simplistic description at work.

The basic sonic foundations are sheets of rumbling (7 or 8 string) guitar and filthy bass floating over a slow motion apocalypse of distorted rhythm, and vocals that sound like they were recorded in the heart of a furnace. These are encased deep in the centre of a quiet storm of other, less easily recognised sound elements, from piercing scree to ambient drone. The opening salvo of We Will Win into Blood Gutters 6x4x1 sets an utterly fucked tone straight away and feels like a dark cloud descending, like a doom death band made of robots that have been pitched down.

But these two are merely a way in to the real meat of the thing, with the third track Intravener stripping it back to bass and a more recognisably industrial pulse, that has as much in common with both Throbbing Gristle’s early experiments and the kind of dark electronica that might appear on a label such as Instruments of Discipline as anything you can think of. Intravener feels like the real start of the album as we enter a strange aural psychogeography. Buried Steel from here on takes a more atmospheric and electronic focus, rather than simply tossing out neanderthal riffs, and interspersing with a few short nightmarish spoken word led pieces.

Intravener till the closing slide into hell that is A Non Temporal Crawl Space…really is an impressive and immersive piece of work, an art house horror movie for the ears…

The likes of Kent House and Two are brief but allow a kind of weird, stifled breath of not-quite-fresh air. They’re short dramatisations which reveal Khost as intent on putting you in a noir landscape of their own design. The run from Intravener till the closing slide into hell that is A Non Temporal Crawl Space (the latter closing out with a brief report from no less than the venerable Eugene Robinson of Oxbow) really is an impressive and immersive piece of work, an art house horror movie for the ears.

The power here lies in taking familiar elements and twisting them through a format we’re all vaguely familiar with into producing something that stimulates the mind’s eye as well as the ear – Buried Steel feels like a soundtracked selection of brief urban horror stories, more than an album of rock songs. Come for the bludgeoning chords of Dog Unit if you just want to experience pummelling rock music at its darkest, but stay for the bubbling techno undercurrent and austere brass of Judgement Is Infallible or the genuinely unnerving spoken word and electronics of Vandals. Heavy music rarely gets this cinematic, or perhaps (bad) dreamlike. It’s not head banging as much as it is heart stopping. It’s also – possibly more than 99% of heavy records I’ve heard in the last year – best enjoyed on headphones, where the layering of subtle effects, samples and non-instrumental sounds really work to take you away.

Complaints? No, but it does bear considering that perhaps the initial two tracks, fine as they are, don’t quite fit in the frame with the rest of the album – they seem a little more straight forward and lay more on the ‘Metal’ side than the grander designs of the rest of the album.

Bookended with a remix of Intravener by Mothboy, perhaps listen to the album from the third track on for the optimum sequence, but don’t by any means omit those openers from your listening. 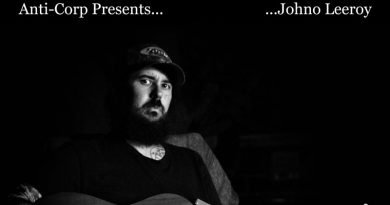