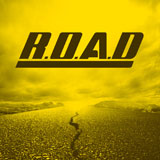 As far as PR fluff goes Nancy based retro rockers R.O.A.D should be forever indebted to VS-Webzine for coining this incredible piece of descriptive writing: “(The) Bastard child of Motorhead and Nashville Pussy, R.O.A.D seem to have been suckled by Black Sabbath, have drunk with Alice Cooper, have took some pills with Queens Of The Stone Age and have watched two or three movies with Rob Zombie.”

I mean with that kind of hyperbole and imagery how could you not want to check out this hard hitting 3 piece from the North East of France? Unleashing their self titled debut album for up and coming French label Sunruin Records (also home to the mighty Wheelfall) R.O.A.D want to transport you to a world where fast, heavy, dirty rock and roll is the coolest trip going.

On the strength of this debut, its hard to disagree, the album kicks off with ‘Dirt‘, a fast paced, up tempo number with full on throaty vocals and shredding guitar courtesy of guitarist and vocalist Joss Dreau which recalls some of the Pepper Keenan era Corrosion of Conformity and the Southern rock stylings of the aforementioned Nashville Pussy. It’s muscular and taught with thunderous drumming and rumbling bass that will send moshpits around the world into a whirling frenzy that harks back to the rock n roll heydays of metal influenced, punky rock bands such as The Almighty with enough melody to offset the gruff hard edges.

‘Look I’m Here‘ follows this up with a more controlled mid paced crawl that builds on the dynamics with alternating whispered/growled vocals and acrobatic lead guitar to add flavour to the proceedings, whilst ‘Drive With The Devil’ puts the pedal back down with a low end chug from Simon the bassist. These tracks are the heartbeat of the band and they all share the same bluesy chops and impressive double bass work on the drums from Yanni.

The band maybe the bastard child of Motorhead and even AC/DC but they have bigger ambitions and ‘Slave‘, despite its old fashioned sound features tricks like the multi-layered vocals and a snaking lead groove which sees the music switching from whirlwind headbanging to a hip shaking dance. The eight tracks that makes up the album largely tread the same vein but try and shake things up by subtly flavouring each with different element such as the hard slammin boogie of ‘House Of Rock‘ and the Guns n’ Roses grime of ‘Fast Machine‘.

Closing track ‘I Am A Rockstar‘ is more of a slow, stop/start kind of affair that is the drinking anthem of everyone who has picked up an instrument and dreamed of being in a band. Here the slower pace and big open chords allow the battle cry of the title to ring loud and long, conjuring the arrogance and brazen swagger of self belief that is required to carry a band. Yeah it’s probably tongue in cheek and it teeters on the ridiculous but behind the lyrics there is a tune dripping in panache and melody.It may not be the greatest song ever or indeed on this album, but if it doesn’t make you conjure a smile then the loss is yours.

If there is a sticking point it is a small one, maybe in its unshakable retro commitment R.O.A.D have overlooked the fact that we live in a cynical age and sometimes you have to be a street savvy. It is a hard skill not to come over as a cliché and for me ‘We Are The Pussy Fuckers‘ is a step too far. On paper the song is pretty decent with its old school feel that changes it up with an atmospheric feel, lead organ and a huge chorus, but somehow it comes across as a bit of an embarrassing misfire. Maybe I am missing the point or something has been lost in translation as it just made me cringe.

Still 7 tracks out of 8 on R.O.A.D‘s debut don’t disappoint if you are looking for a high octane fix of scuzzy hard rock. Like fellow countryman Southern Badass, this might not be the most authentic or original slice of American influenced rock n roll, but it is the perfect soundtrack to blasting down the highway.