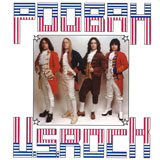 ‘U.S. Rock’ is a reissue of Poobah’s seminal psych rock second album. It was originally released in 1976 and hasn’t seen the light of day since apparently. Which is a damn shame, because what ‘U.S. Rock’ lacks in an imaginative title, is a collection of brilliantly catchy rock anthems with some great psych workouts. Poobah were nowhere near as famous as Zeppelin or Aerosmith, and appeared just as heavy rock was starting to become a movement. It’s exciting to hear what OTHER bands were doing around that time, and ‘U.S. Rock’ is a youthful, fresh faced album even almost 40 years later.

The first thing that strikes you about opener ‘Flesh Fantasies’ is how PERFECTLY 70’s it sounds. The remastering job is great, and nothing is lost. Poobah sound like a trippier Foghat or Cream, combining catchy blues riffing and psychedelic solos with a great ear for melody. ‘Pulling Me Down’ has some great soloing, drenched in reverb, and it is clear within only two tracks that ‘U.S. Rock’ is a lost classic of 70’s blues. This is the kind of music that so infused early heavy metal and hard rock.

‘Watch Me’ has some more great music, but is let down by some weird chattering high pitched vocally nonsense. I’m not even sure what it was supposed to be, but it sounded like a chipmunk getting electrocuted by his balls. The song itself is another wonderful psych rock freakout, spiralling guitar lines over rocking blues and howling vocals. The songs are short and to the point; a blessing in the genre where psych rock can overindulge. ‘Let’s Rock’ is a fantastic slice of honky tonk piano led boogie, melodies worming their way into your brain. It’s catchy as hell, and even has a small amount of scatting (as if it needed anything more funky). ‘Through These Eyes’ is more relaxed, but yet again is punctured with some fantastic soloing.

The major star of this release is guitarist Jim Gustafson. His howling leads and solos are inspiring, and he conjures up some perfectly psychedelic guitar lines to suit each track. The album is worth getting a hold of just for him, as his talent deserves to be heard as far and as wide as it can be sent. THIS is the sound of artistic freedom; before over categorising of genres and all the baggage that goes with it. This is what rock and roll was, a mixture of blues and the overhanging influence of Frank Zappa and Jimi Hendrix.

The album is, sadly, dotted with less stellar material. For every ‘Pulling Me Down’, there’s ‘Keep on Rollin’. The emotional ballad ‘Right Out Of The Night’ is a highlight, but it is balanced out by the repetitive ‘Out Of You’. The bonus tracks are a nice addition however, and the live version of ‘Steamroller’ is fantastic.

‘U.S. Rock’ is an interesting curio; a record that is definitely worth hearing if you enjoy psychedelic guitar work and old fashioned blues rock. It is more of a historical piece; you can see the roots of doom and stoner being planted with records like this. But it fails to grasp you over the full length, even with some great songs. Make this a ‘may’, rather than a ‘should’ buy.