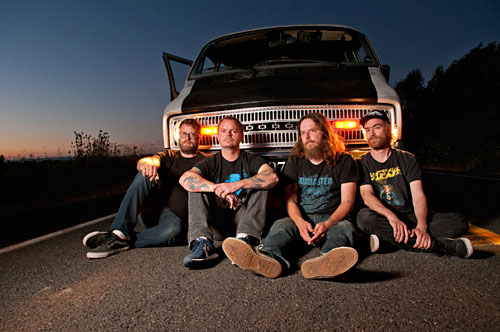 Following a successful first leg, RED FANG are preparing to head back to Europe for the second leg of their monster European tour. Having conquered multiple European cities in January and February, the Portland quartet returned home to regroup before setting their sights back on this side of the pond.

Part two of the tour – on which they will once again be joined by THE SHRINE and label mates LORD DYING – will kick off in two weeks time in Germany. The original venues in both Paris and London sold out in advance and as a consequence were upgraded. The upgraded venue, The Trabendo, in Paris has once again sold out, however tickets are still available for the upgraded venue at the Electric Ballroom in London.

Drummer, John Sherman, commented: “The first leg of our European tour with The Shrine and Lord Dying was completely nuts! We can’t wait to get back and start leg two in a few weeks. The Paris and London shows have already sold out and been upgraded to bigger venues, so the word must be out – this tour is not to be missed! See ya soon!!”

Footage shot by Metalorgie.com and taken from RED FANG‘s performance in Nantes, France back in January can be viewed below:

RED FANG have recently been announced to play a handful of summer festivals in Europe, including Lowlands festival in the Netherlands. Full dates so far are below – with festival dates underneath the current tour dates – with more to be announced in due course.

RED FANG have been enjoying a successful 2014 so far, following the release of their latest album Whales And Leeches via Relapse Records last year. The band kicked off the year with an appearance on The Late Show with David Letterman, and releasing the Whitey McConnaughey directed video for the track Blood Like Cream (view it HERE), before heading over to Europe to tour in support of the album. Released on October 21st 2013, Whales And Leeches was produced by Chris Funk (Decemberists) and mixed by Vance Powell (White Stripes, Raconteurs, Kings of Leon). Featuring such guests as Mike Scheidt (Yob) and Pall Jenkins (The Black Heart Procession), Whales And Leeches propels RED FANG into the upper stratosphere of the heavy rock and metal elite.