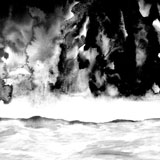 Pontiak are the brothers Carney – Lain, Van & Jennings Carney, to be exact, from Virginia – and ‘Comecrudos’ is essentially a one-track, twenty-five minute long EP, separated into four movements.

Written by the brothers as the audio accompaniment to the sweeping, open dusty vistas they passed, camped in and hiked through whilst driving from Phoenix, Arizona, to Texas, they advise that this is a record best listened to whilst driving, windows down, LOUD, watching the dust swirl, or on a subway journey, imagining that you’re driving, windows down, playing it LOUD and watching the dust swirl.

I think the key elements here are movement/travel, volume and dust. If you got ’em, I guess the rest will fall into place.

The journey begins with an ominous crack of guitar firing up, humming feedback, cymbals splashing and horns blaring a warning in a fashion reminiscent of the clamorous droning horns of the ‘Altered States’ soundtrack – a film about a journey of an entirely different kind – or those of a Tibetan monastery. The thrumming feedback oscillates and swells, as individual horns sound out over the dark blanket of sound until a second crack of guitar ushers us into the second movement. Cycling, rumbling horns dissipate into fingerpicked guitar, ghostly, distant shimmering organ and intimate vocals.

A snaking bassline, brushed drums and trumpet join the blend and before you know it, we’re in the third part of the track and we have an intimate li’l campfire jam going on. Horns weave in and out, moving between hovering drone and swells that punctuate the ambience of the piece and the vocals rise slightly in pitch, losing their intimacy.

The final chapter is ushered in on the back of a whirring, juddering organ riding atop those brushed drums, to be joined by a chopped, clipped tremolo guitar and a slowly unfurling solo. Eventually, all that is left is that majestic, entrancing organ until the bitter end.

Twenty-five minutes may seem like a short time for an epic journey, but as the music unfolds, you’d be forgiven for thinking that time slowed to a crawl and stopped at the end of the record, so immersive is the sound that the brothers Carney make. I would worry that if you were to listen to ‘Comecrudos’ on a subway journey of less than twenty-five minutes long, you’d be in serious danger of going right past your station in a trance.

Equally impressive, aside from its time-warping capabilities, is the fact that it was recorded using basic equipment and only natural amp breakup on the guitar. Considering the tonal variations on display, I’d say this was quite a feat indeed.

Whether ‘Comecrudos’ succeeds as the soundtrack to a journey is down to the individual listener, but its power of evocation is strong. Hearing the record as a whole, it is easy to imagine the swirling dust clouds thrown up by the tyres as we pass through the ancient landscape, and to imagine the thrumming of the organ and guitar as the sound of those tyres on the blacktop. As far as I’m concerned, Pontiak have thoroughly succeeded in crystalising the sensations of their journey and pressing it onto vinyl, so that everyone can follow their dusty trail, wherever it may take them.

Listen to Part III of ‘Comecrudos’ below.