Roadburn is elated to announce the curator for the 17th edition of the festival: Voivod. After the band’s widely acclaimed and artistically inspiring performances at the 2011 festival, Voivod has agreed to curate our festival on Friday, April 13, 2012. 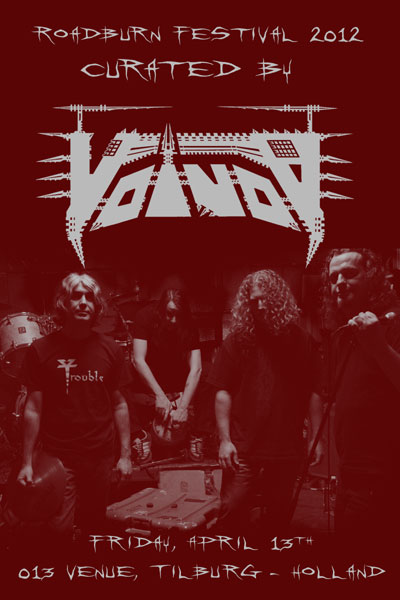 As curator, Voivod will personally select the bands that will play during their special event at Roadburn and perform a special headline show. We had a revelation this year: namely, that Voivod and Roadburn are not only kindred spirits musically and artistically, but also on the same wavelength in other ways, too. Voivod personifies the laidback Roadburn vibe. Respected by fans and bands that span the festival’s sonic spectrum,

Voivod is the ideal pick as Roadburn’s fifth curator. The band will carry on a tradition that began in 2008 with David Tibet, followed by Neurosis in 2009, Triptykon’s Tom Gabriel Warrior in 2010 and Sunn 0))) aka Greg Anderson and Stephen O’Malley at this year’s festival. After Voivod agreed to curate the Friday, we could not resist asking them to stay for a second show. It’s on! The band will appear on Saturday, April 14, 2012, too.

Away comments: “We are truly honored to curate the Roadburn Voivod day on april 13, 2012. We will make sure that the whole spectrum of experimental music influential to Voivod is represented.Thanks to the Roadburn folks for inviting us, we’re already counting the days in anticipation of the event !!”

We are overjoyed to join forces with Voivod for the upcoming Roadburn Festival. The band’s take on thrash metal, hardcore, prog rock, avant-garde and punk has been honed to perfection for almost three decades. Captured in various stages and formations on more than 13 albums, including the legendary Killing Technology, Dimension Hatröss and Nothingface trilogy, the chilling Phobos and 2003′s high energy self-titled release, what began as a desire to do their own thing is now recognized as groundbreaking. The band has strongly influenced scores of musicians practicing the kind of sonic alchemy that defies simple tags like “heavy metal” or “psychedelic.”

We are truly looking forward to the new ideas and visions that Voivod will bring to the festival next year. If asked to sum up Roadburn in one word, “progressive” would be a fitting choice. Evolution is a big part of this. The festival is a tribute to the open-mindedness of its bands, curators and audience. The joy comes from expanding musical horizons and looking at familiar territory from new angles. We will definitely be in for some artistic surprises with the always intrepid Voivod as our curator. We are excited to find out what they have in store for us!

Roadburn Festival 2012, including Voivod‘s special event, will run for four days from Thursday, April 12 to Sunday, April 15 (the traditional Afterburner) at the 013 venue in Tilburg, Holland. Pre-sales will start
Saturday, November 26th, 2011.

SUNWØLF: New Album ‘Beholden To Nothing And No One’ Out Today!

EARTHLESS Hit The UK For 1 Night Only; Support From THE ATOMIC BITCHWAX & MIRROR QUEEN