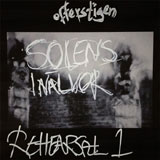 So this band is obscure beyond obscurity. The only facts I can figure out about them is that they’re Swedish, they’re called Offerstigen (means something like “path of sacrifice / offering” in English) but the band name also seems to be the actual physical address of the band according to their Bandcamp site. On offer here is one 25 minute long track called Solens Inälvor which means “the innards of the sun“.

Solens Inälvor is a long drone track with lots of sludge leanings and vocals that are hard to describe but screaming & chanting in a high pitched voice would be a fitting description I think. It’s a really raw and filthy sound and I suppose, as it is a rehearsal, adds bleakness and a funeral doom kind of feeling to proceedings.

I sincerely hope these guys can find a studio and get a sound with a little more strength to it as this recording sounds a touch weak and with it being on the extreme end of lo-fi, increasing the volume on your stereo doesn’t do it justice. It’s like trying to get a loud sound from an old cassette, it just gets noisy. That said, they have a truly original sound with some killer melodies that are filled with heaviness and filthy cold despair is certainly captured here.

They have another release out on Bandcamp that sounds a bit different from Solens Inälvor so my bet is that they’re experimenting to find their own sound. You can practically find something from every extreme metal genres out there in their music, besides maybe grindcore, as Offerstigen are low and slow all the way. For sure, they are a band to watch in the future,

So get on their Bandcamp site and either stream or buy their releases, their available for free as well as a name your price download, but be a bit generous and give them a few quid for their troubles.