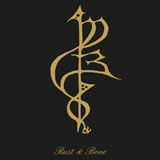 As far as the doom-death hybrid goes in the UK and Ireland, Mourning Beloveth are without a shadow of a doubt one of the most consistent bands of the genre. Better known acts, such as My Dying Bride, Anathema and Paradise Lost have changed and developed their sound across the ages, branching away from their roots into other genres with varying degrees of success. Meanwhile, stalwarts Mourning Beloveth have practiced the mantra of “if it ain’t broke, don’t fix it” and it’s really worked in their favour, as 23 years later they still sound as miserable and resolute as ever.

Following on from 2013’s Formless the Irish five-piece return with Rust & Bone, a five-song lesson in how to partner the cloying atmospheres of classic doom-death and wistful acoustic folk music. Opener Godether takes no prisoners, going straight into the band’s trademark gargantuan song length with a duration that clocks in at a whopping 16 minutes and 24 seconds. They use their time wisely, however, beginning with a strange and almost out of character intro that can be likened to The Doors, before settling into what they’re better known for. The latter half of the song shows strong influence from Pauric (also involved with Malthusian), as things take a surprisingly speedy turn into blackened death metal territory.

Tracks Rust and Bone are the filler tracks of the album; Rust serves as a pretty, acoustic interlude while the latter is a sample laden bridge to closing track A Terrible Beauty Is Born. The final half of this song features some of the most gorgeous acoustic instrumentation and clean vocals that Mourning Beloveth have ever produced. While the theme of this song is ultimately sorrowful, the pristine production quality and folk sensibilities are almost uplifting. While this is probably the shortest album the band have released in a long time, it’s also one of their best. They’ve eased up slightly on out and out misery in favour of softer passages which allows a glimmer of traditional Irish folk to shine through, adding another dimension to their wheelhouse. This should prove for an interesting listen live on stage.