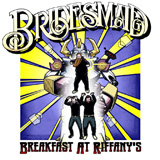 As if three dusty-kilted dwarves were time transported to the present, Bridesmaid comes thundering out of the speakers with the power of Thor’s very own hammer. The trio gallantly ride that god’s lightning, bumping and crashing heavily against the grain with a punktastic flair. Like Beehoover, this band consists of drum and bass instruments, however, rather than vocals, Bridesmaid has traded that position to a second bassist, creating a concrete-against-concrete sound. As they chip through the mountainside that is your skull, they send the rubble toppling down your spine where it might be sifted for colourful jewels.

Breakfast at Riffany’s – Bridesmaid’s new album – is an assault on the senses, especially the ones responsible for the feelings around the bones of the neck; as your neck is apt to snap with every slow, irresistibly heavy bang of the head. You just can’t help yourself. And there’s also likely to be a goat or two flying high over your head, attached to a boney, flabby, or muscular arm – it just depends on your body type (all are welcome here). Just be sure to bring your Viking drinking horn along for the experience – might as well have a hangover to go with the self-induced whiplash in the morning, eh?

For those of you who don’t know what a drinking horn is, just send your inquiry to those beardos from Amon Amarth and they’ll be willing to educate you. Don’t hesitate to ask…. Getting back to the business at hand, being Bridesmaid and their new album of course…initially, I heard the hilarious, yet catchy, cowbell hits (Don’t Fear the Reaper…) in the album’s first track, and I thought the silly – yet wholly fitting – insanity would end there; it definitely caused a grin or two to twitch across my lips, I must say. I was pleasantly surprised however to hear the surfs-up clapping bit at the album’s other end: a song entitled ‘Surfin Zafari’. Again, more grins…I love this band! Not only are laughs present, but also there is plenty of under-bitten, chugging and buzzing going on to satisfy anyone with less-than-immaculate hygiene (And, yes, I realize I’m piling on the metalhead clichés as I write, but it’s meant to be humorous, that’s all).

Throughout, the album progresses with the intentionally slow and steady pace of a bulldozer. There’s definitely a riff or two present which bring Meshuggah to mind: Catch 33’s mono-droning in particular. Perhaps fans of that sort of music might find something here of interest, just don’t be looking for a Meshuggah clone, because Bridesmaid is not. Most every pluck of the bass string rattles so low that it just might coax the teeth from your gums. Maybe this album is safest played in a nursing home – safest for those with teeth, anyway.