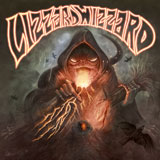 I like this. I liked this the second it came on and the first tunes hit my ears. For most people you know after just a few notes and half a song if you’re going to be bothered with this record you’re listening to and sure it’s the same for me, but sometimes it only takes a fragment of a second and your mind is already made up. That is exactly what happened when this self-titled debut came on. From the first track ‘Twilight Of The Terminator’ to the last ‘Dogs Die In Hot Cars’, it’s no ups and downs in quality at all, it’s just great as a whole.

Lizzard Wizzard are a four piece stoner doom sludgy outfit from Brisbane, Australia and even though they haven’t existed for a very long time, I sense greatness in what I’m hearing as they’ve been playing together in one way or another for twenty years! If you’re devoted to slow heavy distorted music and you have the ability to handle an instrument and can come up with some original riffs and melodies, then why not team up with some other like-minded foes and create? Go for it.

There’s even a Game Of Thrones intro – cover which is just awesome. ‘Game Of Cones’ is the Lizzard Wizzard name of it. The melody itself in its original state is a catchy and powerful piece so why not? It’s like it’s made for a doom tune. Shifting in tempos and with some little extra playfulness thrown in the mix of course. Seven songs and a running time of approximately forty minutes of no prisoners taken attitude doom metal is a strong debut.

The collaboration of stoner doom and sludge is made original and it’s more like two different metal genres in the same song, rather than just a sludgy doom which is more common when mixing genres. I mean, you can clearly hear when they switch it around in the songs from one to the other. From catchy up tempo stoned out 70’s smelling doom to abyss like heavy slow sludge. A yummy gritty production is just a huge plus with this kind of music as it reminds you of a small, dark venue with some slightly cracked amps blasting you with total destruction.

The vocals are also different as three of the four members handles the microphone but the common ground is an angry sounding, sometimes more shouted out than sung and even a bit hardcore (ish) on some parts. According to metal-archives, the lyrics are about weed and sex which could be true with song titles such as ‘Total Handjob Future’ and ‘Bong Dive’ and not forgeting ‘Game Of Cones’. The sick artwork was realised by Iain Danvers who is a local Brisbane artist and also the creator of their ‘Game Of Cones’ T-shirt sold on the Bandcamp page, so be sure to check it out where you can also buy this record as a download with a name your own price so that’s good for cheap folks or those who believe it’s worth a few bucks to help them create more music.

I’m for sure looking forward to be hearing more from Lizzard Wizzard, but as they reside in Australia seeing them live in the near future seems unfortunately unlikely, but one of the festivals dedicated to such music could maybe step on? And if no record company picks these Aussies up after this self-released album, something is seriously wrong with the universe.