Any fan of the genre that came to be known as ‘stoner rock’ in the late 90s or early 00s, whether they know it or not, owe some debt to a man named Jadd Shickler. You see, Jadd along with another man named Aaron Emmel co-founded one MeteorCity Records, in Albuquerque, New Mexico way back in 1997. Jadd and Aaron, being fans of Kyuss, wanted to put out records by similar bands. MeteorCity released singles and full-lengths by The Atomic Bitchwax, Dozer, Lowrider, Nebula, The Obsessed, and many, many more, including Jadd’s own band Spiritu, who released a well-received Self-Titled LP in 2002, and toured with high profile bands like Clutch.

After the demise of MeteorCity, and Spiritu, Shickler went on to form the successful label Blues Funeral Recordings, which again has released essential recordings by Lowrider, Solace, and Big Scenic Nowhere. So, to say Shickler has been a pillar of the stoner/doom community for over twenty years would be an understatement.

So, now he’s back with a new musical project, featuring Spiritu guitarist Mike Chavez, bassist Steve Schmidlapp, and drummer Ricardo Sanchez, collectively known as Blue Heron. They’ll be dropping their debut EP Black Blood Of The Earth/A Sunken Place this month and if these two songs are any indication, this new project is off to a killer start. Shickler’s former project had been rooted in the ‘desert rock’ strain of the genre with a Kyuss /Lowrider vibe, while there are some elements of that in Blue Heron, the band are actually not quite that easy to pin down.

Opening with a rolling, rumbling riff and drum intro Black Blood Of The Earth owes more to bands like The Midnight Ghost Train, or Sixty Watt Shaman, initially, before adding some elements of a Kyuss/Lowridervibe. Shickler‘s voice sounding much gruffer initially than he sounded in Spiritu. However, showing his diversity and vocal range he drifts between a cleaner croon, to the aforementioned bands gruffer vocal stylings. Black Blood Of The Earth makes great use of its seven-minute run time, with Blue Heron showcasing different sides of the band, Chavez’s tone and a suitcase of riffs, as well as Sanchez’s rolling drums keep the song moving along throughout all the twists and turns.

a solid, well-recorded, well-executed first single by veterans of this genre who know all strains of stoner rock inside and out…

A Sunken Place is a slightly more straightforward riff-banger of a song. Chavez offering up a pretty beefy main riff, as Sanchez and Schmidlapp own the rhythm section. Sanchez’s drumming is notable, he makes his presence really felt on both tracks. Again, I get a real Sixty Watt Shaman-type vibe from these songs, and I mean that in the best way possible.

Black Blood Of The Earth/A Sunken Place is a solid, well-recorded, well-executed first single by veterans of this genre who know all strains of stoner rock inside and out. I’ll be looking forward to their full length.

On a personal note, I lived in Seattle in the late 90s when I first started rediscovering the riff after years of garage punk, and one of the first labels and releases I latched onto was MeteorCity. Imagine my surprise to find out this label, releasing all these bands, was based in my hometown of Albuquerque! Small world indeed. 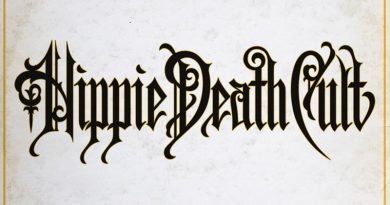