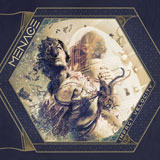 Longstanding extreme metal guitarist and prolific mastermind Mitch Harris returns with his latest creative project in Menace‘s ‘Impact Velocity’. Deemed a “result of his life’s work,” Harris delivers what could be considered his first proper solo effort, and it seems appropriate at this point in his career some 24 years after his transition to the death metal scene in the form of 1990s classic “Harmony Corruption“. It would be logical to assume and anticipate similarities to Napalm Death when considering ‘Impact Velocity’s 13 tracks; even more so given the bulk of Harris’s career has been centered in the grindcore/death metal scene. But that would be too easy. He challenges the listener to engage in a musical journey of self exploration and discovery. While Napalm Death seeks personal and political change through rebellion, anarchy, and aggression, Menace begs the listener to look inward…and the message is clear: through self improvement, maturation, and enlightenment we can also affect change.

There’s a decidedly eclectic feel to this album, as many of the tracks conjure images of futuristic landscapes where the line between man and technology is blurred. In fact, the fusion of technology and the human condition and their synergy is a recurring theme throughout. Technology is not to be feared…it can be an essential component in understanding our identity on a quantum level. Through this suggestion Harris keeps the prog-metal book open, and while many of the chapters have already been written by other similar minded innovators like Cynic, Menace shows us there’s still some ground to be covered. Shane Embury (bass guitar, Napalm Death, Meathook Seed) teams up with Harris yet again, rounding out an accomplished cast of musicians who all share a common artistic vision: musical catharsis. Where Cynic took a more organic jazz infused tech death approach during 1993’s ‘Focus’ and 2008’s ‘Traced In Air’, Menace adopts a more ‘metallic‘ identity; Harris revisits some of the industrial influences explored during his time with Meathook Seed, contributing to the richness and complexity of ‘Impact Velocity’s sound.

From opener ‘I Live With Your Ghost’, it’s clear that Harris has charted a new course; the song possesses a drive and feel similar to the gothic rock territory covered with Tiamat’s ‘Cold Seed’. But where Tiamat revels in dramatic melancholia, Menace treats this bittersweet sadness as a necessary transition towards rebirth. Indeed, there is a distinctive positivity that’s palpable here and throughout most of the album’s compositions. The band guides the listener on a search for spiritual regeneration, knowing that darkness, dissonance, sadness, anger and regret are part of the journey. But the ‘brightness’ that underlies the music allows one to confidently stay the course. The point is for us not to be consumed by our demons but to transcend them.

The electric acoustic/synth arrangements of ‘Painted Rust’ complement these themes of transcendence and self reflection. The song steadily builds on a foundation of swirling drum fills, culminating in a beautiful melodic guitar passage which abruptly ends as if awakening from a dream. But later in the album things come clearly into focus with the crushing ‘Drowning In Density’. Easily the most accessible track on offer, Harris reminds us that his control of THE RIFF is definitive. There’s a faster tempo Jerry Cantrell swagger on display, from the clean vocal harmonies (which are present throughout the album) to the overall staying power. As Menace dives deeper into more aggressive, atonal territory in the latter half of the album, this staying power remains. The tracks are consistently impressive, reaching a climax in album closer ‘Seamless Integration’; an appropriate finale, given the track’s lyrical emphasis on collective consciousness (physical, universal, spiritual) as a means of enlightenment. On a side note, if you can get your hands on the bonus track, ‘Insult To Injury’, it’s well worth the effort and essential for the full album experience.

As much of the lyrics on ‘Impact Velocity’ suggest reconciliation of past mistakes, regret, and missed opportunity, Menace urges us to learn from emotional pain and channel it towards the creation of something greater. And what Harris achieves through music and metaphor is arguably great; or at least can be considered a profound statement on the complexities of spiritual evolution. Highly Recommended.