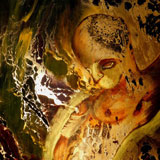 Men Of Fortune – hard to pigeonhole, hard to review. They sort of sound like a lot of things, but don’t sound like a lot of things as well – it’s not riff driven enough for metal, but it’s kinda metal, it has the occasional moment that sounds a bit like a weather beaten, western-soundtrackish Tool, but unlike Tool it’s actually good music. It’s a bit droney and psych-y and maybe even post-metally, but.. it isn’t. Like Black Hell with less metal and more prog, perhaps?

Like Black Hell will do well enough. It does lack the huge riffs which made ‘How The Rest Was Lost’ such a ridiculous beast, but it’s still a very satisfying head nodder, and were I not a clean cut married man it’d probably be begging my friends and/or relatives for some cheap green to go with it. It has that lovely production where everything sounds live, beefy and organic, like a slab of dead cow cooked rare, but it’s still crisp, layered and everything sounds perfectly in it’s place. Synths coming in from time to time (the excellent closer and gorgeous, drifting ‘Nymphatic Meditation’ being good enough example), the guitars doing plenty of good noodling, often stonery, sometimes all angular and proggy like a less-strange King Crimson…it’s a good sound and the band seem to really know what they’re doing. The extended jam throughout ‘Some Crystal Dawn’ is a particularly good example of the strengths the band has – long, proficient jams, forward momentum within the thoroughly psych’d out drift, leads a floating everywhere. No denying this is a pretty cool sound.

It’s time to nitpick though, and ‘Time Lovingly Bled’ is not without flaws. It’s a subjective, hard to prove thing to say, but there is a general lack of memorability throughout much of the album. I’ve listened to this about 8 times through, which certainly suggests that I like the album, but if you asked me to hum a riff or solo, or drum beat etc etc. chances are I’d be there having to think for a while to remember anything at all. The vocals are cool but aren’t exactly delivering very strong hooks, and everything else is often guilty of just sounding like it’s there. Certainly, the guitars could deliver a bit more in the vein of some solid riffs or particularly memorable lead lines. Not expecting a pop album, but expecting an album to stick with you is a legitimate thing to expect!

That said, it is still a thoroughly entertaining listen and I’d still recommend this. Would likely be a lot better live, and will likely be one hell of a grower as riffs and vocal patterns slowly work their way into my subconscious. Going back to my “How do you describe this band?” question, I’d say that perhaps the best analogy for this album is that it’s like a particularly good curry – it goes out almost as soon as it comes in, but it’s a pleasurable experience nonetheless.