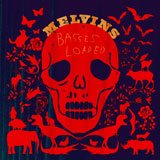 (The) Melvins are, and have been for a long, long time now, Buzz Osborne and Dale Crover. Everyone else just kind of rolls in and out from album to tour to next album in a very fluid way. Basses Loaded takes that to a kind of logical conclusion with six different bassist playing across the album’s twelve tracks (eight of which having been previously on two Amphetamine Reptile EPs, and one on a split record with Mexican garage punks Le Butcherettes). Alongside Jeff Pinkus (from Butthole Surfers, who played on Hold It In), Trevor Dunn (King Buzzo’s Fantomas bandmate, who played on Freak Puke, and Everybody Loves Sausages), Jared Warren (of Big Business, and regular returning member since 2006) along with Dale Crover (reverting to his original 1980s role in the band), four strings are also put to good use by new full-time member Steve McDonald (from Red Kross) and Krist Novoselic (formerly of Nirvana).

The Decay Of Lying (with McDonald on bass) is sparse yet huge in an almost Earth-like way in its verses, showing a touch of Melvins characteristic subtle-menace in the chorus. Choco Plumbing (with Jared Warren on bass and joining Buzz on vocals) sounds, not surprisingly, pretty Big Business-y but with a less bass-heavy, rockier feel. It might be the best track on the album. Maybe. Out of its knob-twiddling tail-tail end rises the Big Riff of Beer Hippy, with Crover on bass, and drummer Mike Dillard completing the original line-up, now known as Melvins 1983. Beer Hippy has that descending, staggering Dazed and Confused thing going on and chugs along boozily.

Beatles cover I Want To Tell You (with McDonald) sits very nicely with the aesthetic of the bassist’s “home-team” and, like all Melvins covers, manages to sound simultaneously spot on and completely Melvins. The chewably chunky riffing of Captain Come Down (with Pinkus) feels very much like a missing track from the excellent Hold It In. Hideous Woman (with McDonald) is (also) possibly the best track on the album; at once gloriously chuggy and catchy, yet twisted and disquieting, as the Melvins always are at their best.

Shaving Cream (with Crover and Dillan) is a version of that oft covered 1940s novelty record in which the singer hilariously nearly says ‘shit’ several times. Except in this version there is no shaving cream, only lots of shit. Planet Distructo (with Dunn, and therefore in the guise of Melvins Light) is half Jazz Odyssey, half Pink Floyd.

War Pussy (with McDonald)… no wait, this might be the best track on the album… is more straight forward than your average Melvins track, essentially demonstrating that they can crank out a crooked version of whatever the hell you call the straight-up 21st century heavy music from the likes of Baroness and Mastodon, and sound fucking awesome doing so. Of course they do, they’ve been doing it for nearly thirty years.

Maybe I am Amused (with Novoselic on bass and accordion) is jaunty stamp and clap along number in which the former Nirvana member’s characteristic playing style comes across much more distinctly than I ever imagined it would. Phyllis Dillard (with Crover and Dillan) is all nod-along chug and swagger. Actually, could this be the be– ah, forget it!

The record closes with a version of Take Me Out To The Ball Game, which is that song they sing at baseball games, apparently. Oh wait, Basses Are Loaded, I get it!