It’s a mark of quality of Mick Harris‘ work that in spite of Moments being almost a quarter of a century old, it sounds utterly ageless. Moments seems to exist – as does pretty much all of the Lull catalogue – outside of space and time completely in fact, as a representation of the dark rotations of the windmills of Harris‘ mind.

To best explain the contents of this originally 99-piece opus, that’s now 100 with this reissue, to the uninitiated, Moments is at its best an experience similar to lying in a cosy bed and listening to a storm in the distance outside. Or, perhaps, a sensory deprivation tank might be more apt than a bed. Though this is dark ambient, the tone here is more meditative than menacing, something the name of the project has always made obvious and which always set Harris‘ work, under this alias, apart from some of his colleagues in this particular sonic spectrum at the time. His work quietly overwhelms the mind at times and concentrated listening reveals a universe of tiny movements in each miniscule fragment.

Obviously, with a record like this, there’s no standout track, the pieces flow like a slow melting glacier along an icy river, as a complete immersive work, rather than standalone tracks. A cluster of glassy tones scrambling around each other will give way to a moment where the sub-bass gently cradles the inside of your ribs. It’s fascinating to try and picture how Harris made these sounds. You can imagine all kinds of unusual methods and devices, bowed this, and prepared that, approached with mastery and care in equal measure. In reality, it may all be machines but to picture that mental image shatters the otherworldly illusion. The sounds here all seem both natural and phantasmagoric all at once. This is the sound of the freezing moon that Mayhem foolishly thought could be summed up with distorted guitars.

It’s never imposing. It’s never harsh, always seemingly more distant than it actually is. But it does feel cold and nocturnal. To some perhaps it may seem ominous, and to others soothing, which is the very nature of this music, but the reality is that Moments somehow actually remains to be both these things. There’s a particular section (Moment 16 to Moment 19) where if you close your eyes, you can almost imagine you’re hearing the mournful horn of some kind of ghost ship passing by, like a kind of mournful low siren.

Around the halfway mark (Moment 49) a sound like an enormous singing bowl that seems to bypass your ears and resonate directly within your skull. These examples sound frightening perhaps, but the effect is strangely like an internal head massage. Harris has perfected trick of locating frequencies that are the right side of pleasing over painful and is what sets Moments in stone as a prime artifact of this genre. There is, in fact, a strangely alien beauty to the best of Moments, and in the closing sections particularly.

If you missed the initial release and need to put a sonic barrier between you and the world for 90 minutes, Moments should be on your shopping list immediately, and it certainly feels like a well-deserved re-release, timed perfectly for the onset of winter. If you’re volunteering for a sleep research study any time soon, this might make a perfect soundtrack. 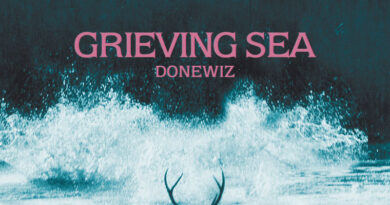