Straight out of the heart of Gothenburg in Sweden come six piece Dun Ringill, who describe themselves as a ‘heavy doom rock collective’with their second album Library Of Death, the follow up to 2019’s debut Welcome. Gothenburg, the home to such iconic bands as At The Gates, The Haunted and In Flames, and can now add Dun Ringill to that already impressive roster of success.

Being compared with the likes of Obsidian Sea and Saint Vitus musically, Dun Ringill use evil and darkness in their lyrical themes, and fuse it with a musical backdrop which is both doom laden, and entwine this with Nordic folklore metal, to form something entirely new to me.

Library Of Death is a seven-track feast of an album, with such song titles as Ravens Tear, My Funeral Song, and Dance Of The Necromancer, it isn’t subject matter for the faint hearted.

As the album opens Ravens Tear kick starts proceedings, and instantly I’m transported to a world of folklore and wizardry, it has a full bodied doom energy to it, the guitar work keeps me hooked, and by the time the hurdy gurdy is being played I’m reminded of times past, and visits to Wacken, where the likes of Dun Ringill are worshipped as gods.

Library Of Death follows and this reminds me instantly of Dio, I can’t put my finger on why, maybe the mysticism, perhaps the lyrical delivery, but either way, I’m transported back in time, to Dio in their heyday. It’s mystical, but also dark and imposing, and with lines like ‘Welcome to the library of death, it will draw your last breath’ it makes it abundantly clear just how dark the subject matter is.

Dance Of The Necromancer opens with the line ‘I want to play a game’, and I instantly think of Jigsaw from the Saw movies, but this couldn’t be farther removed from those if it tried. This track has so much going on, highs and lows, loads of heaviness, and so it comes a complete surprise when the additions of trumpet and jazz flute work their way in to the mix.

It’s a dark and moody finisher, and the organ at the end is a real flourish to close proceedings…

There are times during the album when I’m hit with the realisation that there are some questionable lyrics being used, but the quality of the musicianship makes up for this.

For me this is an area of the whole heavy folk music which I’m new to, and I allow it to take me with it. Especially as the tracks are performed in more of a story telling way then I’m used to with my go to playlist, so it takes me a few listens to get used to this different approach to creating music.

Tracks six and seven are the real highlights, in particular NBK. It stands as it’s so fundamentally different to the rest of the album up to this point. It definitely rings of Dio and Judas Priest, it’s far faster in pace, and sounds far more modern considering the album up to this point is stooped in more classic soundscapes. It’s a weird shift, and totally unexpected.

Track seven, Reverend Of Many Faces closes the album, a doom filled beast it chugs at me in a way that isn’t overly present on the rest of the album, and its hard at times to believe that its even the same band. Its unlike tracks one to five in style, but then its unlike track six as well, and this blows my mind. It’s a dark and moody finisher, and the organ at the end is a real flourish to close proceedings.

As I stated earlier, I had to have multiple listens to Library Of Death as a whole to get into the mindset for this work. It isn’t usually an area of metal I choose to listen to, as mostly it leaves me cold, but listening to this has been an awakening. I can now finally understand and appreciate what fans of this folklore metal find so encompassing, and as a previous visitor to Wacken, when I couldn’t see what the fuss was about, now I have a much clearer understanding, I can truly see what it has to offer.

Maybe Dun Ringill have opened my eyes, who knows, but one thing is for sure, these guys definitely know how to put a monster of an album together. 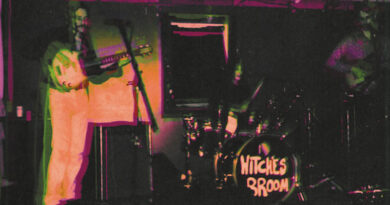