You would think that Heath Rave (Lotus Thrones) would be content to sit on his laurels so as to bask in the adulation that followed his superlative debut full-length Lovers In Wartime. You’d be wrong. Since that album, Heath has been immersing himself recording material, not only for a full-length follow-up but also four EP’s to coincide with the seasons. Autumnal (Autumn) will be followed in due course by Hibernal (Winter), Vernal (Spring), and Solaris (Summer).

As a quick recap, Heath Rave is a former member of Across Tundras and Wolvhammer. Since departing the latter in 2015, he took an extended hiatus from music to focus on sobriety, during which time he also got married and became a father, Which leads us up to where we are now and Heath‘s seeming desire to make up for lost time with an upcoming slew of new releases.

The EP features some absolutely exquisite artwork from Toby/Shadow Cartography and brought to mind Australian artist Seldon Hunt, who you may recognize from albums by the likes of KK Null, Neurosis, Jesu and The Melvins. Like Hunt, Toby‘s work occupies a naturalistic space but eschews the dreary ‘flower power’ associations of psychedelia, instead adopting a far more detailed and intricate approach akin to technical drawing.

As Heath related to Decibel, Ghost Forest ‘is about the suffocation of our coastlines. As the sea levels rise from climate change and hurricanes and superstorms ravage the coastline, its trees are suffocated by saltwater, literally drowning and turning them white.’ It appears strangely timed to coincide with the COP 26 conference in Scotland, whether this was intentional or not is open to conjecture. The accompanying video, as you’d expect from the nature of the subject matter, is equally as gloomy. Musically there is an evolution from Lovers In Wartime and even more of an appreciation for Scott Kelly/Neurosis style post-metal complexity. I was initially taken a little by surprise by the track, but after a couple more listens I started to appreciate the new-fangled twists and turns.

If you loved Diametric Retrograde from Lovers In Wartime then you will adore Lycanthrope Cardiology, a track which Rave described in his interview with the Getting It Out podcast as being about werewolves on speed. The Killing Joke industrial vibes and Sisters of Mercy bombast makes this is a gloriously fun over the top listen and the perfect antidote to the bleak preceding opening track. If the goth night in Lancaster featured tracks like this I would be more predisposed to attend, instead of the godawful cybergoth tripe that actually features.

Bombsites, as with Ghost Forest, is a much denser listen and requires a keen ear and close attention to detail in order to pick up on all the subtle variations and nuances contained within. What it boils down to essentially is a tasty slice of vintage early Cure circa Pornography era before they discovered New Order and pop. The EP concludes with To Walk The Night a cover of the Samhain classic from the Samhain III: November Coming Fire. I was delighted hearing this seeing as they’ve always been my favourite of Glenn Danzig’s projects. The track is actually a medley as it also features Let The Day Begin from the same album, but then you’d have to be a Samhain nerd like myself to know that. A lot heavier and slower than the original(s) but no less powerful.

Autumnal showcases Lotus Thrones/Rave‘s desire to expand musical boundaries while cleverly balancing this with a more immediate fare that helped draw me to the project in the first place. 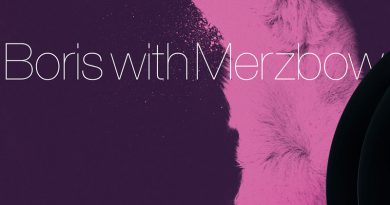