Well, hey there 2022, how’s it going you ask? Well, let’s see, the ongoing global pandemic is still in full swing, there still seems to be this whole global warming thing, and yes, having a real issue with plastic, thanks for asking. Oh, how’s the music scene going? Yeah, it’s pretty good. I’ve had to endure A LOT of God awful Christmas music recently, but thankfully I’ve just been handed the new album by Lady Luna And The Devil to review, so that should rectify an otherwise abysmal situation.

What’s it like, you say? Okay, let me tell you my experience of it all…

When passed the album I had no awareness of Lady Luna And The Devil at all, I went in completely blind, thinking perhaps that I was discovering a band not dissimilar to Jess And The Ancient Ones. Yep, after reading the initial overview, I took from it occult doom, and that is an area that I have some knowledge on, so I jumped in.

What I wasn’t prepared for was just how the ten tracks of this concept album played out. It wasn’t what I was initially expecting, or hoped for, so I set that disappointment aside and got on with having a listen, without drawing any comparison.

That part was easy enough, as I couldn’t overly compare LLATD to anyone else that I have in my musical consciousness. I was reading somewhere while researching the band, that they had been put into the same ballpark as Ghost, and anyone who knows me, will know that I hold no love for Ghost, so I’m pretty vague if that comparison holds up. From my recollection, if you took Abba and mixed in some mask wearing rock band, you have Ghost. The same can’t be said for Lady Luna.

It took me a little while to get into it all, as where there were certain elements that I really quite enjoyed, which were most notably the doom-driven guitar and drums, there were also elements which, for me, felt too long and dragged out. This took me away from the overall theme. I would have loved for maybe two or three longer tracks, which covered the entire subject matter, but in smaller bursts. At times with this, I felt like it had been overworked into a whole album, and that somewhat took away any angst. Obviously, it’s a concept album, so the overall idea is that it’s a full long-player and not an EP, but my interest waned a few times while listening, as it seemed to be a little repetitive like there were some great ideas, and some filler too.

That being said, once I had gotten my head around the fact that Lady Luna isn’t Jess from The Ancient Ones, as she sings in a more ‘doom opera’ style (a term I picked up on the internet while researching), it gave me the opportunity to focus on the actual accompanying music too.

This, for me, was the highlight. With ‘The Devil’ and the ‘Hands of Doom’ providing the backline of heavy doom, guitar driven, chugging monstrousness, there are some truly magical passages of beautiful key work, courtesy of Lady Luna. Most notably, it can be found on track seven, Sinterlude, which, as the name suggests, is a piano interlude, in amongst all of the craziness.

This is the polar opposite to tracks such as Mother Of All Sin, and Wrath, which complete with guttural growl passages of vocal, are altogether a different animal indeed. Working through the tracks, there were a few highlights, which I did really enjoy though, notably track three, Lust, track four, Greed, and track eight, Pride.

Lust, for its sleazy, doomy swagger, which gives it an incredibly sexually charged element, which I couldn’t help but pick up on. Greed, musically, is interestingly avant-garde, but with a doom injection. It kind of reminded me of the old Santa Baby song, where Lady Luna lists the items which are apparently the height of opulence. I guess it’s still to close to Christmas for that comparison to have slipped by, but who knows. And Pride is a chuggy, heavy, and more standard doom track, and this is where I strike the most interest in. It does also get me thinking, and this is my thought…

I think where both Otep and Tura Satana (Manhole) both took the concept of the seven deadly sins previously and made them a visceral attack, this time around, while there are the elements of revenge and what’s deserved, it feels less about a power struggle and more about riches and empowerment. It’s more about embracing the seven sins and wanting them. It’s refreshing to have these themes from a different point of view, and the overall balance on the album as a whole is an interesting take.

As the follow-up to 2020s debut outing, His Blessed Book, Mother Of All Sin builds on the groundwork of the first album and is an upgrade too. More versatile, without sacrificing the darkness. This album won’t be for everyone, but if you bathe in the darkness, I can see this completely being your cup of tea. Dark, doomy, and ritualistic, it’s a solid release indeed. 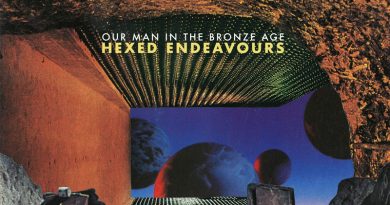 Review: Our Man In The Bronze Age ‘Hexed Endeavours’