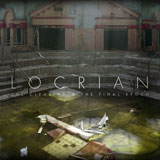 Locrian have been lurking around in the murk of the underground for coming close to a decade now, I first became aware of the act from their 2010 ‘Territories’ release on At War With False Noise, having picked up the vinyl with no prior knowledge of who they were or their particular sound, suffice to say I was very pleasantly blindsided by their utterly unique approach. This particular release has been snapped up by Relapse, with the backing of such a renowned and influential label now behind them, this almost certainly means great things for the Chicago based trio. ‘The Clearing’ itself is a re-issue of their vinyl only release on Fan Death Records put out in 2011, bundled together with a second disc of previously unreleased material which makes up ‘The Final Epoch’.

Locrian manage something which is pretty rare in the realms of heavy music, in that they really do span so many different genres and influences that it is near impossible to easily classify their resulting works. This double disc package is no different, drone, noise, black metal, industrial and Krautrock are all thrown into the musical blender, completed with lashings of urban paranoia and bleak atmospheres with some (slightly) more uplifting passages (like on the Kraut infused opener ‘Chalk Point’) and some downright disturbing forays into abstract experimentalism, such as the closing epic to the first disc and title track ‘The Clearing’.

Atmosphere is certainly the key to their craftsmanship, whilst a lot of other acts have attempted to combine many different elements into their sound, not many achieve such a disturbing coherency as you will find on display here. One act springs to mind which does come close and that is Menace Ruine (Profound Lore), like Locrian they present an aesthetic which blurs boundaries and makes you question where exactly they lie in the ever expanding musical landscape…is it metal? I would certainly say no, despite their respective label allegiances, but they both infuse the same brooding darkness and downright evil menace that pervade the genre as a whole. This means that the average metal fan will be able to instantly associate and find a kinship within their sound, as well as appealing to a more experimental audience, a feat which is not so easily attainable.

Hearing Locrian is akin to hearing Sunn for the first time and ‘getting it’, an eye opening, almost transcendental experience to say the least. ‘The Clearing’ starts off with a more formal sense of musicality and is slowly deconstructed as the album progresses, droning electronics and very subtle guitar work weave together perfectly, taking you on a journey of despair and almost catatonic desperation. Everything about it screams black, a genuinely unsettling visage, but one that ticks all the right  boxes for someone who gets a kick out of these sorts of things (such as myself).

‘The Final Epoch’ provides the perfect accompaniment, most compilations of unreleased tracks don’t tend to flow as a coherent whole, but this provides a definite continuation from disc one. From the opening electronics pulses of ‘The Final Epoch’ itself, via the disjointed guitar squalls of ‘On A Calcified Shore’, through to the intense feedback and noise of closer ‘After the Torchlight’, the second disc certainly delivers and you would be none the wiser to the fact this was just a collection of unused tracks, rather than the actual second half of ‘The Clearing’ proper. As you can tell, I could not lavish enough praise on this musical artifact, I seriously suggest you pick this up as soon as you can if you have not already given yourself over to their dark prowess.