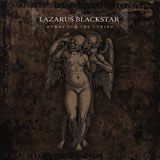 Unwashed scum lords of post-anarcho Yorkshire Pennine misery (although one is from Brum and one is from Scouseville), the titanic Lazarus Blackstar are possibly the greatest unsung heroes of British doom. This is their third studio album, and first with vocalist Mikhell, who debuted on their last EP, ‘Tomb Of Internal Winter.’

Opening track ‘Cold Hands Grow Pale’ instantly demonstrates that this band has no equal when it comes to heavy and mournful. The guitars are strangely melodic in their asphyxiating heaviness, weaving catchy yet always darkly pessimistic lines of almost Joy Division-esque skill over traction engine bass and drums; whilst Mikhell’s superbly gurgling growling dying vocals are also surprisingly tuneful.

‘The Self Inflicted Wound’ booms out the speakers with chugging steamroller mid-tempo violence blasting the surrounding landscape with a Tunguska explosion of carbonised fury, and the third track ‘My World…My Way’, a cover by deceased LA hardcore band Infest, is one of the bleakest and sheer heaviest things that mine ears have ever cast their ear-like eyes on – it literally screams out HORROR OF MAN’S STUPIDITY – my head fills with black and white pictures of shattered buildings, war-maimed children and burned out corpses. Unbelievable heaviness descends on your cranium and squashes your miserable tiny head into your weak and puny torso like a huge black fog sent by the twisted tormentor of this hate-filled world. The riff (or should it simply be chord sequence?) is one of the biggest and most depressing ever committed to a recorded medium. Delicious in its chilling execution of pure punk doom and without doubt one of the highlights (lowlights?) of this whole album.

‘Crawl’ is yet another insanely heavy yet catchy bomb blast of drop-tuned malice. Yes, you will be humming the guitar refrain over and over as you go about your daily chores. LB do this kind of doom so well that they’ve mastered it and called it their own. ‘A Hymn For The Cursed’ is a bombastic and brilliant ten minute dirge that further illuminates this adept song-writing skill, which is even further cemented by the two last tracks: ‘At The Foot Of The Coldest Mountain’ and the ominous closing number ‘No Light Can Reach These Depths’ stretch out the end of this excellent album with punishingly mordant guitars and horrifyingly anguished vocals.

‘Hymns For The Cursed’ is a GRANDLY MAJESTIC and beautifully crafted exposition of doomcrustsludgecorepunkrockmetal that finds Lazarus Blackstar maturing like a foul blackened cheddar into the logical conclusion to the mighty down-tuned project that began life as Khang once upon a time in Bradford, many riffs ago.