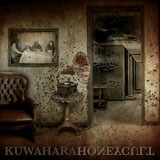 The sound-world of Kuwahara, a duo consisting of M.Peck and Mike Honeycutt, is one of grainy kaleidoscopic twilight murk shot through with fractured transmissions from some alien transmitter device. Dull bathyscaphic pulses shudder across arcing, shimmering feedback that subsides into eerie field recordings from some location that may or may not exist. Kuwahara have soundtracked the fall down the rabbit-hole, and it is terrifying.

‘A Basket For Elliot’ opens the proceedings, with rapid cross-cuts across a bed of disembodied NASA radio transmissions and plaintive electric piano interrupted by violent outbursts of static and absurdist sound-collage, after which ‘Savoy Duke’ – all creaks, groans and drones – amps up the feeling of foreboding. The meditative drones, gong-tones and volume swells of ’89 Emperor Gods’ are etched across with scything distortion that sits just below the surface, adding a deeply uncomfortable note to a sound that should be tranquil. The dopplering ping of a sonar system loops over mechanical chattering and dimly-heard wailing Eastern vocals to create a chittering, insectile soundscape on ‘Nil’, which in turn is wiped out by stuttering blocks of harsh roaring noise interespersed with what sounds like the audio equivalent of the infamous ‘Kirby dots’, so beloved of legendary Cosmic Comicbook auteur Jack ‘King’ Kirby. Gradually, a regular beat emerges from the sputtering, swirling maelstrom describes as ‘Bibbed Local Portions’, before it too is overwhelmed by a fresh wave of all-obliterating noise and becomes a part of the tracks infernal engine-room. An eerie air runs through ‘Teeth Marks From An Angry Void’ that could be part violin and part pterodactyl, darkening the already pitch-black Dark-Ambient atmosphere to near unbearably stygian levels – this would scare the britches off of Lustmord, even. The crushing depths of the ocean-bottom are evoked and dredged up in ‘Peer Into the Grain’ and ‘Daydream Visionary’, in which absence is EVERYTHING and the distorted sound of your own breathing sounds like fluttering cuttlefish close by. Buried in the murk of ‘Peer Into The Grain’ is the sound of a childs toy organ, chiming into the depths to no avail. At these depths, nothing can survive.

The final transmission before the void engulfs us, ‘Whose Children Are We?’, is heralded by what sounds uncannily like the blades of a helicopter spinning underwater, followed by an ominous martial crunch, like gravel under jackboots. Dense, unnerving and oppressive, this immediately gives way to smeared horn-like sounds, a barrage of random knocking sounds and a distant voice. The rest is silence.

‘Kuwahara’ operate in the same sphere as ‘sound artists’ such as The Hafler Trio, Lustmord, Andrew Liles and, in particular, Nurse With Wound. The sounds herein are all of a very organic nature – even the obviously processed ones – and orchestrated in such a way as to create a sense of very real encroaching dread. In order to fully appreciate and play up the full potential of ‘HoneyCult’ to scare the bejesus out of you, I recommend listening to it on headphones, late at night, whilst reading any of the works of Thomas Ligotti.

Ladies an’ gennelmen, we are floating in space, and no-one can hear you scream. 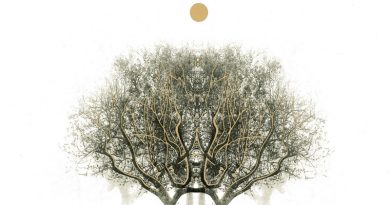