The visceral, acapella screaming at the start of Blood Eviction is probably the perfect introduction for IRN’s new Self-Titled EP. Laying out their stall as purveyors of ‘sonic desperation, heavy anxiety and miserable formlessness’ the band that calls Toronto, Canada home aren’t fucking around when it comes to creating some of the bleakest music imaginable.

After numerous split releases and two heavy weight albums, IRN (2013) and Sewer Disease (2014) the band look to consolidate themselves with two mammoth length, block levelling tracks that look to crush your head, twist your mind and corrupt your soul.

Blood Eviction itself is just over ten minutes of dense, grinding hardcore sludge that crawls from the speakers gargling and shrieking. As with their previous releases, there are influences that can be found from the likes of Iron Monkey, Noothgrush and the UK’s horribilis outfit Dragged Into Sunlight – in the sense the music is more in the slow, atmospheric vein of the ‘sludge’ genre rather than the smash of EyeHateGod.

It is difficult to come up with adequate words to describe this release at times, such is the sheer, unrelenting nasty brutality. Over the course of ten minutes the band flex through many exploratory forms of how to create ugly music. The swirling nature of the track gives a sense of rise and fall, like they seemingly sink into moments of (comparative) calm or fatigue only to regain and recapture the spite that drives them forward as they wrench themselves back to the coalface of their hateful message.

That is not to belittle the musicianship or competence of the band. Originally hailing from a black metal background, the three musicians, Jeff K (bass, vocals), Will B (Drums) and Ken M (guitars) have carefully crafted every inch of this EP, to where the band combine like some sort of hateful Megazord into a towering cacophony of noise at the peak and then dip in and out to share the spotlight.

For example, there are times when the guitars almost sit it out and Will’s drumming goes berserk, or the drum patterns settle down momentarily so the guitars can dangle elements of melody or effect before the whole thing gets yanked out from under you again.

They do slow, they do slower and they do glacial; no matter how much Will beats the shit out of his kit…

Jeff’s vocals should also be mentioned as some of the most throat scrapingly raw performances I have heard in quite some time. There is literally nothing on this EP from his delivery to suggest anything but pain and suffering, from guttural threatening to tortured screaming.

This sonic punishment is followed by the aptly titled Forever Miserable which manages to top the opener in terms of length. The long, drawn out intro is a slow dance of guitar and chaotic drumming before the track just stops and manages to find a totally new gear of sloth and entropy.

IRN’s ability to maintain this kind of discipline is impressive and they hold this dark, breathless belligerence for what feels like forever (in reality only a few minutes) before they seemingly cut the track in half with a guitar breakdown that injects a sense of life and speed into the proceedings.

In reality this is only the band rising then swerving your expectations. They do slow, they do slower and they do glacial; no matter how much Will beats the shit out of his kit, Ken and Jeff will hit you with big, ringing, suffocating notes and long screamed vocals.

IRN may have only produced two tracks for their latest release, but the 22 minute run time is still an exhausting experience. The sheer focus to produce music this unforgiving is a piece of craftsmanship in itself and there is a lot going on for something that, on the surface, you could be forgiven for thinking it doesn’t do very much. Even when the tracks almost stand still, it allows the band to cram as much into their music as possible.

It’s not going to float everyone’s boat and frankly it’s an EP that would scare the shit out of your Nan, who complains about anything heavier than The Beatles being a racket, but I can’t really fault what they have done with this two track EP. 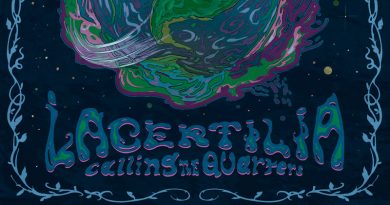