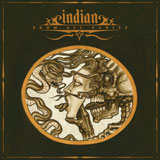 It’s cold; almost zero degrees with an icy Western breeze. It’s dark; nearly black, but the pale dawn sun is just beginning to penetrate the horizon and its grey-orange outburst gradually illuminates the low-hanging mist adorning the farmland around me. It’s a Monday and, as winter draws ever nearer, my morning dog walks before work have descended into effort-necessitating trials; rites of solemn duty. Four of my senses are already filled: the sight of freezing horses and leaf-less trees; the smell of thick, churned mud and rotting hay; the drying taste of tea going stale in my mouth; the firm crunch of damp gravel at my feet and the unwavering wintry bluster. Could I feel any bleaker? Any more wayward, isolated and doldrum-defiled than I do now? As I hit play on Indian’s ‘From All Purity’ at that exact moment to complete my array of misery-bound senses, the answer is a firm and assertive “Yes”…

Indian’s last outing, 2011’s ‘Guiltless’, wasn’t just a great doom/blackened noise record, it was one of the best of that entire year, or any other year for that matter. Backed to the hilt by Relapse Records and under the wings of tour-mates of the stature of High On Fire and Yob, Indian went from being a band on the edge of breaking into metal’s ever-rotating circuit, to being something far darker altogether: an act so truly dishevelled that they will surely never break free of the shackles of the underground abyss. It would have taken something of monstrous and punishing depravity to better ‘Guiltless’, but in ‘From All Purity’ Indian have unleashed a record altogether beyond the scope of doom, sludge and noise nihilism itself.

Opener ‘Rape’ clutters through bedlamic screams and broken guitar strings before stumbling upon a wayward and haunting groove which powers through staggering fields of apocalyptic drums and riffs which will have you starring into caverns of vast emptiness. Dylan O’Toole and Will Lindsay’s vocal lines are harrowing and attack the ears like two butchers hacking away at the last steak on the planet. There’s some solemn message lurking amidst the metallic din to the effect of something about the “rape of everyone”. It’s at this stage that you review the elements that made ‘Guiltless’ so epic and realise that any final shreds of mutated hardcore have finally vanished from the Indian sound to leave just a core of blackened, terrifying noise not unlike Khanate or Burning Witch. As Bill Bumgardner’s behemoth-crushing drums pound us out alone, wet, exposed and afraid, it’s very clear that there will never be an ounce of respite no matter which purity Indian claim this nightmare to be coming from.

‘The Impetus Bleeds’ and ‘Rhetoric Of No’ collapse back onto more recognisable sludge song structures and introduce the odd melodic guitar flourish which at least lights a candle in the sea of darkness laid down by the guitars. ‘Rhetoric Of No’ in particular is one of the more immediate, visceral moments on the record and the choppy drum-work and rapid-fire microphone bellowing adds to the sense that Indian are truly yearning for whatever it is that they’re screaming into the night for. There’s a cleaner guitar peak, or at least a gear shift upwards about halfway through before the ghost-seeking electronic noise infusions get the better of the traditional instruments as if to echo some kind of futuristic dystopian landscape as the track implodes in on itself and crashes back out of the ether.

‘Directional’ is a slower crawl through a blood-clotted tunnel of hatred. Ron DeFries keeps all bass lines to an unforgiving, almost storm-gathering state as he and Bumgardner suffocate the rhythm and progression that O’Toole and Lindsay appear to strain to express more forwardly. There’s a Wolves In The Throne Room or even Darkthrone rumble to those gigantic cymbal claps and scuzzy, tumulus guitar bursts as the riff refuses to evolve or waver from its straight, war-torn path. Paradoxically, the penultimate track ‘Clarity’ is just five raw minutes of discordant feedback and psychopathic throat torture – demonstrating oh so very little structure following the rigidity of ‘Directional’. Ironically, ‘Clarity’ lacks any clarity unto itself whatsoever.

Mammoth closer ‘Disambiguation’ is a definite stamp of grandiose quality and a textbook exercise in slow, painful, head-aching doom. Much of the fractured noisenik battering is omitted in favour of some interwoven, almost My Dying Bride-meets-Nachtmystium stylistics. Both razor-sharp blasting drums and soul-bruising riffs marry in with those screeching vocals to take the track on a noble journey from spiteful misery to danger-bound fury. ‘Epic’ is a word far too overused in these circles, but ‘Disambiguation’ harbours a memorability and a conclusive edge that few acts could get close to defining.

…I unlock the front door slowly, making the most of that dull, glowing feeling as I step back in from the cold.

In many ways, I’d say if you haven’t heard ‘Guiltless’ yet, go grab a copy of Indian’s last record BEFORE you submit yourself to ‘From All Purity’. You’ll see the transcendence unfold, the many evolutions of this great band’s sound and above all, the despair forever seeping from their guitars, their vocal chords and their lives in their latest opus. This is up there with the most desolate records I’ve ever heard and I’m both fascinated and terrified to see where Indian can possibly descend to from here. This is a very, very long way from most people’s definitions of purity, yet somehow it gets frighteningly close to pure, perfect torment in itself.