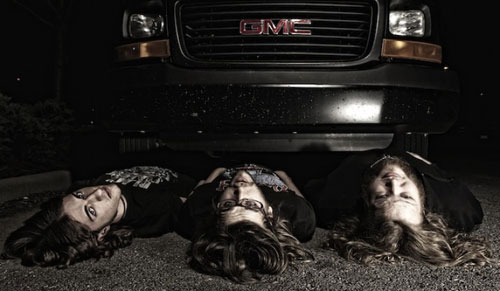 Once upon a time, at the height of Tom Waits’ career, he grew weary of touring and decided to regain his strength for a bit by disappearing into the dry, tornado-ridden southern plains of the States where the women are kind and the whiskey runs rampant like a flood.

As he stumbled home on a particularly overindulgent night, he befriended a band of smiling, bearded ruffians who handed him a copy of Kyuss’ ‘Blues For The Red Sun’ plus an ounce of their finest weed and said, “Take this and call us in the morning.” Needless to say, Waits was floored by the heavy grooves and vowed to devote his life to heavy rock ‘n’ roll. And that, boys and girls, is how The Midnight Ghost Train came into existence.

Clearly none of the aforementioned is true, but with the tunes on the Topeka, Kansas natives’ new EP ‘Buffalo’ as simultaneously gravelly, heavy, bluesy and downright dirty as they are, it all might as well be. Plus, ‘Buffalo’ is a definite contender for “sexiest cover art of 2013”. And after a successful stint of European touring under their belts already this year, we have no doubt these guys will fit in perfectly at DesertFest 2014.