Picking records for review is a fraught business, especially if you’re generally too lazy or disorganised to listen to the promotional tracks first. I’ve definitely had times when my heart’s sunk a few minutes into my first listen as I’ve realised that I’m going to have to somehow generate 500 words about 40 minutes of pure musical mediocrity. On the other hand, there’s the satisfaction of hearing something new and knowing within five seconds that it’s going to kick some serious arse. The latter scenario neatly brings us to Heavy Temple.

Heavy Temple seem to be something of a rarity these days: a band that’s toured loads but not recorded a great deal of music. Thankfully, the good people at Magnetic Eye Records are helping to set this right by releasing their first album Lupi Amoris. The interweb tells me that the Philadelphians trio have been around since 2012, although only bass player and singer High Priestess Nighthawk (props for going the whole hog on the stage names) remains from the original line-up. Here she’s joined by the equally well-monikered Lord Paisley (guitars) and Baron Lycan (drums) and the results are glorious.

The press blurb promises the listener ‘gargantuan stoner doom’ and the photos I’ve seen online very much conform with many of the genre’s standard tropes (wearing flares in the woods, holding skulls, etc), but I’m pleased to report that Lupi Amoris is much more interesting than this might lead you to think. For a start, while the band are plenty heavy and crank out some crushing riffs, I don’t personally hear much doom in the sound. Instead, the band really had me thinking about were Lo Pan. Not that they sound particularly similar on a superficial level, but there’s something about the dynamic tension between the riffs and the vocals that you don’t hear very often. Or I might have just drunk too much coffee, who can say?

Anyway, Heavy Temple kick the first album off in style with A Desert Through The Trees. The blurb offers a description of the band ‘crashing forth like a mastodon in a thunderstorm’, which I would say is pretty apt. After opening with a storming wall of fuzz, the band apply the brakes and slow things down to an irresistibly chunky swinging groove while Nighthawk’s vocals soar over the top. This is such a good track and has elements from a huge smorgasbord of the heavy rock spectrum. For me though, it made me think of some of my favourite stoner records with its winning combination of dirt, heaviness, groove and melody.

The Wolf starts out more mellow before the inevitable fuzz kicks in. Again, Heavy Temple nail that mid-tempo groove that all good stoner rock is built upon, but the vocals bring something new to proceedings – there’s something arresting about the juxtaposition between the riffs and the singing across the whole record. More concretely, The Wolf is the main track I’ve had stuck in my head solidly for the past week.

Heavy Temple nail that mid-tempo groove that all good stoner rock is built upon, but the vocals bring something new to proceedings…

After two such good tracks, it’s interesting to hear Heavy Temple change tack on The Maiden. I’m going to say that it has a definite space rock flavour – the sort of space rock where the bass pounds out a simple repeating riff while the guitar squeals through a whole array of delay pedals. You know, the good kind. To be fair, the guitar does join in with the main riff for much of the song and it feels like the soundtrack to an intergalactic trip from a late 60s sci-f film.

Isabella (with Unrelenting Fangs) is the longest track, built around my new favourite song structure of extended cool riff – outro-y bit – cool riff comes back but not for as long as the first time. I particularly enjoyed how Heavy Temple settle on an awesome riff, only to make it even more awesome when the vocals kick in by adding some tastefully placed effects (a Flanger? Phaser?). It’s another cracking tune that manages to combine sounding as heavy as a boat anchor with being as infectious as a new strain of COVID.

The album finishes with instrumental Howling Of A Prothalamion, which starts off like Monster Magnet’s Goliath and the Vampires before stretching out to really show off the band’s musical chops. Although there are no vocals this time it’s another top-quality track with thunderous drumming, solid bass and more spacey guitar than you could shake a 50s spaceship-shaped stick at.

And that brings me to my only real criticism of Lupi Amoris: it’s too short. Five tracks clocking in at 33 minutes is long enough to take it out of EP territory, but when the music is this good, I want more. I’m not going to be greedy; another track to take it up to the 40 minute mark would make the whole thing entirely satisfying. Still, I shouldn’t grumble. The running time does make for a lean record that’s filler-free and definitely an essential listen. So go on, chop chop. 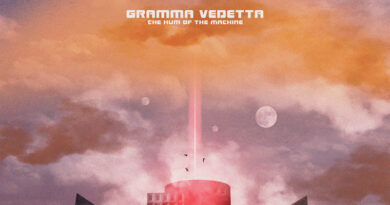 Review: Gramma Vedetta ‘The Hum of The Machine’