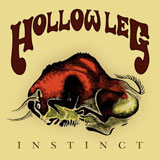 Hollow Leg present an island between what some may perceive as hardcore and sludge. Not slow enough to really command a doom tag, this two piece band mean business by unrelenting mid to slower rhythms and although this may be their forte this is also their weakness. As with some many reviews I could actually say the songs sound all the same and in part they do. The same characteristics are present in every song. I therefore began writing this review with a mind to go through every song and give it my undivided attention. The repetitiveness was so incredibly great between songs that it actually became very difficult with a CD that has 10 tracks and no lyric sheet to accomplish this feat.

This album brings the optimum generated feeling of pure anguish. This two piece rip the thin veneer between pleasant listening and screaming loudspeaker butthole surfer vocals. It’s not complicated but direct and therefore demands your immediate attention. Accentuated rock to the floor riffing determines the drive and pace of each song. There is certainly an EyeHateGod nod of the cap element being played out while the guitar leads are not overworked and leave you wanting more.

They also provide up pace and Orange Goblin worshipping songs that promise to rip your face off. Attacking in their intent it only becomes limited by there being no deviation. Many songs do eventually change direction to what some might regard as denim-laden beat down riffs. There are strong songs, Caretaker, Grace, The Return to name three but this album could have been so much more. If I was to put my critical cap up on then the drums could have rocked out more, unfortunately for the most part they don’t.

But don’t get me wrong this isn’t a bad album it’s just not a great album. It’s just okay, the vocals are overbearing in the mix although when there is singing it takes the band to an altogether different plain. The riffs also recline in one dimension but there are some sweet moments of inspiration when the guitar work transforms the song. Oh man! I leave this review frustrated, I’m assuming this is their first release, well as one teacher said to his pupils “this was a good effort but you could do a whole better guys because I believe in your ability”. A short précis will state for the record this release was under worked and over long. Keep it tight keep it interesting and for goodness sake lads let the songs breath.