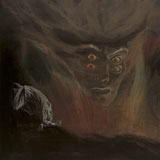 A while ago I heard the EP of Finnish Swallowed and they immediately drew me into their web of slow and ominous death metal. Needless to say I jumped at the chance to review their full length album.

The mad piping of ancient cults, worshippers of the forbidden gods, tempts us into the album. The Opening Of The Key works like a malignant charm and soon I find myself sinking into the depths of forlorn temples.

Reverence Through Darkness is the first true hymn on Lunarterial and the moment it opens its gigantic jaws we are truly swallowed. Swallowed by a whirlwind of madness and desperation. Slow and rotten riffs, covered in dust and a thick cake of dried blood are presented to the shrine of a blind, horrific idol. The thing comes to life and spits out a whirlwind of blast beats, locusts and curses. Audibly this is somewhere in between Teitanblood, Katharsis, early Nile and Cultes des Ghoules, such is the madness contained in this song. The vocals go from guttural growls to mad howling and the singing of the possessed. Psychedelic effects are mixed in with the horror and the nightmare is complete. For seven minutes the darkness lasts and at the end I bow my head in reverence to the maddening idol in its bizarre shrine.

I continue my journey through an oddly geometrical tunnel, deeper into the bowels of this weird temple complex. Here the Arterial Mists of Doom fog the mind. I become uncertain of my senses and start perceiving the world around me in a different way. Here, a slow dirge that could have been played by Unholy is entwined with a sickening Swedish groove. This four minute dirge ends in raging chaos akin to Sadistik Exekution. In the trance like state I am in, I proceed and take a turn into even darker realms.

At this point I cannot tell up from down or left from right. There is no light here, nothing for my eyes to reflect. Yet somehow I can see my surroundings. Strange reliefs are carved into the enormous walls, reliefs of endless processions of men, women and children being led to slaughter. All sacrifices to a formless being, a Black Aura of unearthly origin. Black Aura is a ten minute dirge of disgusting doom and death. The chanting here is even more possessed and the priest is obviously under the influence of some psychotic toxin. The riffs are the walls of this lightless tunnel, speaking of nothing but doom and the glorious evil of the old gods.

A dripping sound awakens some of my senses and a thirst comes over me. In the void I find a spring of sorts. I drink heartily from it, only to vomit out a strange Black Phlegm. The air is filled with the reverberating sounds of fuzzed out guitars and the mad howls of the priest of doom, chanting in the distance. Unsure if I am walking or floating I proceed further in the direction of that hypnotising voice. That voice, that maniacal voice, becoming less and less human as I come closer to its source. Entranced I follow its call, unaware that I look just like the figures carved into the walls, unbound yet ensnared.

At the end of the path I now see a flickering of fire in the distance. The tunnel opens up into a cyclopean hall, so large that my mind cannot comprehend it and I cannot find words to describe it. In the center of this accursed cathedral stands an altar, and behind that numerous strange and otherworldly beings slither in and out of existence. I become aware that hundreds of tunnels converge here, coming from all directions. From their jagged mouths come long lines of my fellow men, all entranced by the chants of the priest. We have all come here to bring Libations. A twenty six minute long sermon is held here, a sermon of creeping doomed riffs, suffocating guitars, drums that beat out weird rhythms and sudden explosions of blasts beats, all swirling through the massive subterranean space, travelling upward, together with the smoke of the burning hearts of willing sacrifices, some still conscious enough to cast their own hearts upon the pyre. All died with a smile on their faces. The priest’s chanting is now hardly human anymore and the music has turned into a disharmonic chaos of reverb and psychotic riffing. I step forward and I laugh as the obsidian blade opens up my chest.  Oh, the joy I feel, holding my own beating hart. I gladly offer it up as a libation to these wondrous gods of old and as I join in the hymns of madness, I step into the sea of darkness forever.

Lunarterial is nothing short of genius, proving that there is indeed a very fine line between madness and genius. I am not sure on which side of the line Swallowed belong. 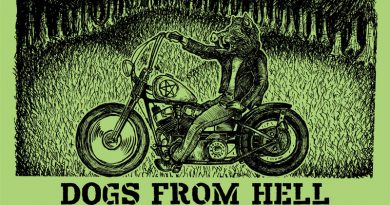