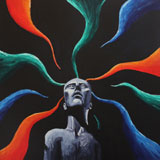 Before I get into this review, I feel I have something of a confession to make: I’ve never really been that interested in drone music. If I had to list all the elements I would think are necessary for a truly great song, I’d probably mention layered instruments, complex rhythms, great lyrics… you know, all that good shit. With that known, it’s easy to see that the minimalist philosophy behind the drone genre might not – on the face of it – hold all that much appeal for me.

So it was that, being conscious of this, I resolved to try and come to Heliovore’s debut record with an open mind (while, of course, accepting that such a thing is actually impossible). I normally try to give every record I review at least one spin where I do nothing but sit there and listen, so I stuck it on and sat back to take it in. The first track, A Part Of The Hivemind, didn’t do much to sway my prejudices. It’s exactly what you’d expect from a drone tune: slow, repetitive, barely evolving over its 9:27 running time and – to my ears – pretty boring. Heliovore’s skill with names is very much on display here, as repeated listens will make you feel as if you’re being lulled into a near catatonic state, incapable of free thought. Part of the hivemind indeed.

Needless to say, I didn’t make it through my first listen without starting on some other task while it played on. This album is slower than setting paint, and while it got a lot more interesting after the opening track, I found it almost impossible to get into without some kind of hook. But I stuck with it, playing it over and over in the background while I set about other things…

And after a while, I couldn’t turn it off. It became a constant atmosphere in the room, like a group of monks chanting an Om mantra. In a way that’s its hook: given enough time, it will permeate your brain like a creeping fungus, growing through every synapse until it’s all you hear in your head. No-one could ever accuse it of being “catchy”, but perseverance will be rewarded with greater appreciation.

Having said that, there are a few problems that stand out. The drum track is uninspiring and under-produced, and while the guitar and bass effects are generally well-constructed, there are a few weak links, particularly the flanger effect in Ghosts In The Cognitive Labyrinth. Overall the production is pretty solid, but considering the minimalist nature of the album, it’s not hard to feel that it could have been just a little better.

Still, fans of drone and ambient music in general should discover something worth investing time in here, particularly as it’s now streaming free on bandcamp. And while I’m still not entirely convinced that this works as an album rather than a soundtrack to some art-house film, it’s certainly piqued my interest. If nothing else, stand-out track Meaning really gives a hint of the evocative powers Heliovore possess, and their record left me wanting to search out and experience more of a genre that, up until this point, I’d almost completely ignored.