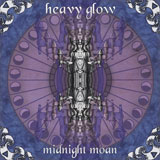 Ok, I’ll admit the majority of recent music I get to listen to is as a result of this reviewing lark, and yes, there is a lot of impressive stuff out there. However, if left to my own listening devices I will, more than likely, head back to the murky musical world of the 60’s and 70’s for my aural pleasures…you see, I like my music to be matured over time like a fine single malt, I like the patina of age that time has given those older recordings and the sense of experimentalism and fun the bands had free from genre pigeon-holing. From time to time though, the review lottery pays some real dividends as lady luck slides her hand into my pants, gently cups my balls with her warm hand and whispers in my ear “it’s ok, salvation is at hand”

So that brings us to the new Heavy Glow album. Shamefully I’ve missed the previous two EPs released by this San Diego based three piece, a fact I intend to rectify forthwith, but suffice it to say, this album has given me the most sublime reach round I’ve had in a very long time. Heavy Glow kick out a down and dirty, hard assed blues rock that listens to the echoes of the generations that have gone before but don’t shy away from throwing some more modern ingredients into their thick gumbo.

“Lose My Mind” kicks things off with a guitar tone that’s thicker than rhino hide and a vibe that come straight from The Black Keys via Led Zeppelin. Vocalist/guitarist Jared Mullins presides over the proceeding with his dextrous yet tasteful playing, like a young Billy Gibbons, and his sweet soulful voice has echoes of a more bellicose and testicular Neil Young.

A blast of guitar shakes the intro of “Slave Dance” before the band delve deeper into their Led Zep infused light versus heavy dynamic…delicate swinging blues versus are interrupted by mighty Sabbath tough riffs and once again Mullins’ guitar playing is showcased to awesome effect backed up by the rich fuzz bass of Joe Brooks and the floor shaking Bonhamisms of drummer Dan Kurtz. It isn’t all retro rocking goodness with these guys though, “Today Is Technicolor (One Step Closer)” displays a more modern poppy flavour, not a million miles from what QOTSA have made their name playing but with far more mud on their boots and filth under their fingernails.

Next up the band deliver their killer blow. “All My Money” is this album’s centrepiece track. A bouncing, up beat stomper that has heavy overtones of the Black Keys and buttfucks you with one of the most memorable chorus hooks you’ll hear all year. This song is a sure fire hit…catchier than typhoid in a slum!!! If you’re not singing this little ditty all the way to the bank and back again you’re dead from the neck up!!! It’s a shame that after such a masterful lesson in the art of song writing the band let the ball drop on the next tune for the only time on the whole album. “Collide” is a pretty weak attempt at 90’s style alternative grunge pop. It rides on a couple of lazy riffs and a lazy vocal without really going anywhere. It’s still catchy enough but ultimately unsatisfying.

Thankfully, “Purgatory Blues” pulls the album up by the scruff of its neck and is, as the name may suggest, a towering gospel flecked blues workout that again pulls from the Led Zep and Black Keys light and shade dynamic and sees Mullins back on form. “Smithereen” is a solo workout from Mullins…just a man and his 12 string acoustic. It’s a beautiful moment that evokes the spirit of Jimmy Page’s acoustic work with a healthy nod towards Neil Young and Roy Harper…music doesn’t always have to be heavy to be heavy!!!

Following the brief instrumental frippery of “Midwestern Lullaby” the band slam into the big boned rifferama of “Diggin’ A Ditch”. Another Led Zep fired guitar and vocal call and response piece that punches hard and punches low. It isn’t all cut and dried though as the song deviates from its macho, 70’s rocking balls out crunch into a bridge section that is prime time Faith No More before the guitar, bass and drums gang up on you to slam you against the wall and steal your lunch money for the song’s strong armed climax.

This album has been around for a while now and although it may not have had the biggest immediate impact there is no doubt that this is a slow burner with a very long fuse. It may take time to seep into peoples’ consciousness but God damn it will!! Oh yes, you can rest assured of that. Album of the year? Maybe, it’s certainly a contender and best of all, it’s a free download!!! Holy fuck, it’s like having Christmas early!!! 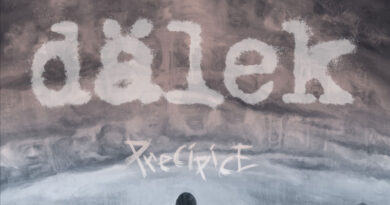