I had a ton of thoughts come to mind as I was attempting to absorb Rock ‘N’ Roll Fetish, the debut album from Philadelphia doom/proto-metal/garage-bashers Grave Bathers. The most prevalent being, this record fucking rocks, and the next being it’s LONG. Grave Bathers, featuring Heavy Temple’s Jaret Salvat-Rivera, aka Lord Paisley on guitar, deliver a sound that’s equal parts Sabbath, The Stooges, Pentagram, and MC5. They’re simultaneously a full-on, proto- metal doom, and a Detroit-style, raucous, garage rock & roll band and they manage to stuff it all, and then some, into every single second of nearly every single song on  Rock ‘n’ Roll Fetish .

Just witness album opener Ghost Em All, Salvat-Rivera unleashes a rollicking, proto-metal riff very similar to Zeppelin’s How Many More Times, vocalist Drew Robinson lets fly with his best Rob Tyner-style ‘Wooo’ as the band launch into a proto-metal basher, at least that’s what we think, but before long we drop into waves of crushing, fuzzed-out doomy riffage, before circling back into the original rollicking riff then bassist Davis M. Shubs drops the hammer down on yet another movement. One could literally ride any of the main three or four riffs, turning them into multiple songs. All this, and we’re just getting started.

Behold the Sabbath-insanity of Brain Thief, complete with tons of riffs as Robinson now displays his best Ozzy Electric Funeral take on vocals. However, before we know it, we’re now back in raucous, proto-metal territory, that is before Shubs destroys the place with another fuzzed-out bass riff as Grave Bathers spiral once again into Detroit ‘69-mode, paving the way for, I shit you not, a fucking drum solo courtesy of drummer Sean Lafferty, before the band bring the house down.

The Mole must’ve been written with The Stooges We Will Fall playing on repeat in the background, because here, Robinson now shows us his best Iggy, that is before the band descend into waves of proto-metal riffage, followed by a cleaner breakdown from Salvat-Rivera, as Grave Bathers alternate between aforementioned The Stooges weirdness, mega-riffage, trippy psychedelic passages, and crazy, rock & roll freak-outs, all stuffed into one song.

Again, Grave Bathers cram a ton into Tarman Cometh, a thumping, riff-y rocker, but I’m left wondering if the song would be more impactful if it was cut in half from its near six-minute run time. The same goes for the title track, Rock ‘N’ Roll Fetish, which features some excellent, thwacking drums from Lafferty, killer fuzzed-out bass from Shubs, with all sorts of riffs layered across the joint from Salvat-Rivera, and second guitarist Steve Capitanio. Here, lest we think we’re going to have another crazy rock & roll finish, Grave Bathers instead drop into a total ‘70s prog-freak-out-mode, similar to what The Stones did on Can’t You Hear Me Knocking off the immortal Sticky Fingers, before we drop back into psych-freak-out territory.

Blood Money, featuring its total UFO, Rock Bottom-style main riff starts off as one of the more straight-forward rockers on the record, before Grave Bathers take another left-field turn into all sorts of proto-metal riffage, but again, this song is long. If it’s a straight-up rocker, I’m not sure we need two, or three more movements. To my ears, this thing would’ve kicked my ass riding the main UFO-riff and keeping it around the three-minute mark.

Vampire Of The Rock Operator sounds like what you’d expect from this title. Grave Bathers letting it all hang out, the riffs, the drumming, the bass, the leads, I mean this thing is epic at a whopping ten minutes and forty-four seconds. Grave Bathers pour it all on here as Robinson drops into his Ozzy-esque wail. However, if Vampire Of The Rock Operator wasn’t epic enough, Grave Bathers unleash another, the massive, crushing Nordic Funeral. Huge riffs, earth-shaking rhythm, and Robinson’s Ozzy vocals bathe the listener for a good five minutes before the band unleash a lethal attack on the outro. Taser Shield, a killer garage-basher gets to the point by wrapping things up in just over three minutes, by far the shortest track on the record. All this before the massive, rollicking, riff-stuffed madness that is closer, Ape-Like Thing brings this colossus release to an end.

Rock ‘N’ Roll Fetish is a massive, sprawling, dense exercise in all things ‘70s heavy, made all the more impressive, as allegedly the record was captured live-to-tape at Memphis Magnetic studio. How the band pulled this off direct to tape is a wonder. There are so many movements, so many riffs, and so much going on, Grave Bathers must’ve spent an eternity preparing these massive songs to be recorded, prior to going into the studio.

It’s an impressive feat indeed as Grave Bathers Rock ‘ N’ Roll Fetish totally succeeds in delivering a sprawling, Sabbath meets The Stooges clinic, impressive in its vision and execution. Grave Bathers join Ecstatic Vison as forerunners in Philadelphia’s now-thriving heavy underground rock scene. Still, it’s this reviewer’s opinion that the record could’ve been even more impactful if they kept some of these songs shorter, but overall, minor complaints. Recommended. 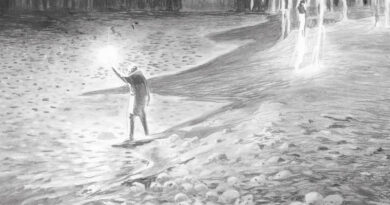 Review: Famyne ‘II: The Ground Below’