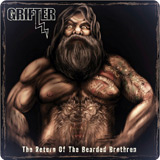 Music gets a lot of baggage attached these days; but truly great, timeless music always has the weight of conviction behind it.

When rock music became one long cathartic therapy session in the nineties, at first it was something raw and challenging to the status quo, by the time the naughties rolled round it, seemed that every middle class kid who felt they were hard done by was shouting, rapping or crying over Rage Against The Machine cast offs and you had to wonder just how many of these issues were genuine and how many were faking it.

Formed in 2003 at the bottom of the South West of England, there is one thing that has remained constant for Devon based band Grifter and that is that they have never faked anything. They have never faked anything because they don’t have any pretence; they are just three guys who have played together for a long time, have no egos to speak of and have a chemistry that helps them write catchy, kick ass rock n roll, plain and simple.

When I interviewed singer Ollie at the start of last year and asked him about the approach to writing a song, he spoke about creating stories rather than drawing on life experiences and this is something that allows the band tremendous freedom and harks back to an era where rock was big and bold, and most importantly fun.

Let’s face it, Ronnie James Dio didn’t ride a tiger, James Hetfield was never ‘Trapped Under Ice’ and AC/DC were never caught with their pants down… well maybe they were, but I digress. Grifter have a sense of humour that permeates their music from start to finish; it isn’t Steel Panther type humour, it is (at times) subtle, observational and cutting as can be evidenced in their song titles like She Mountain, It’s Not Me, It’s You and Princess Lea.

Having evolved from a murky, stoner rock beginning, over the course of several EPs and their 2011 debut for Ripple Music, they have emerged in 2014 as a sleek rock n roll band who have taken the club jam vibe and lyrical dexterity of Clutch and welded it on to the heavy blues roots of Sabbath and the stadium honed, proto-boogie slickness of ZZ Top. The tired and inaccurate comparisons to Kyuss that dogged their early days are now even more meaningless as The Return Of The Bearded Brethren to looks to roll into town, terrorise your women folk and drink all your beer.

This formula has seen them go from playing the corners of pubs to the stages of Desertfest, Hard Rock Hell, not to mention a triumphant set on the Sophie Lancaster stage at Bloodstock and the band waste little time in announcing their come back with a bang on the paean to Arthur Guinness’s popular Irish stout that is Black Gold. Featuring all the now familiar Grifter trademarks; a funky, rumbling bass line and shuffling drums courtesy of Phil Harris and drummer Foz Foster build a platform for front man Ollie Stygall to bellow and croon his way through a song that has an anthemic chorus as tall as a skyscraper and is as catchy as a pandemic on a plane.

After the urgent speed rush of blues rock, it is on to the aforementioned She Mountain, again another rollicking fun filled ride that conjures a massive sound from the three piece. Full of energy and winking with salacious humour, you’ll find yourself nodding along and smiling even before you have caught on what the song is about.

Following the breathless one – two opening punch, the band slows the tempo for Paranoiac Blues, featuring some fancy slide guitar and big open chords. This track stomps along adding a different dimension to the band’s sound – still steeped in blues and booze, but with a more moody southern style swagger and the rallying cry of “When Armageddon rises I will greet it gun in hand”.

Next up are two of the album’s stand out tracks and already essentials in the live set list, Princess Lea and Bow Down To The Monkey, contrasting in subject matter from the kicking against the march of time (still the same beneath the greys and lines ,yeah) and the human condition’s obsession with an omniscient deity. Both of these songs feature some beautiful ascending guitar runs, taught rhythm work and spot on, tongue in cheek, observational lyrics that help elevate Grifter beyond the pack.

The quality of the second half of the album remains mercifully as high as the first with the chugging adrenalin rush of Braggard’s Boast, the autobiographical title track, the frenetic, unapologetic groove of It’s Not Me, It’s You and the huge sounding Firewater; all jam packed with riffs to die for and punchy memorable hooks that never outstay their welcome and (as in the words of The Bearded Brethren) leave you wanting more.

The album rockets along like a dog chasing a balloon, grinning and manic, yet utterly captivating and something you’ll want to return to again and again before the band cap it off with a homage to the Masters of Metal and their own live favourite, a cover of Black Sabbath’s bonkers Fairies Wear Boots. If I am being harsh it’s addition doesn’t really add anything to the album in terms of content, Grifter have given the listener nine original tracks that more than stand up to repeated scrutiny, but their version of the classic is extremely well executed, perfectly captures the spirit of their own material and also gives a great insight into some of their myriad influences, as well as being a great way to reintroduce this live staple to a new audience.

Aided by superior production courtesy of long time friend and producer Rich Robinson, The Return Of The Bearded Brethren is a fantastic record that tops any of the bands previous output with ease. All of the songs on Grifter’s sophomore album have been crafted to make you sing yourself hoarse, to dance like a loon and to smile your fucking ass off whilst listening to it. The bottom line is that Rock n Roll is about catharsis and whether you are a tattooed biker or a suit and tie wearing office worker and this music is every bit a joyous celebration of young blood, old veins without any self conscious pandering to trends, it is just what it is and that is a great record.

Buy the album, see the show, they’ll never let you go. And you won’t want them to.