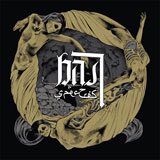 It’s been a long time coming for Kingston-based black metal/doom band Bast, but this year finally marks the arrival of their long overdue debut album ‘Spectres‘. Originally formed as a two-piece back in 2008, Bast have been a sporadic but always welcome presence in the London music scene for years, racking up some impressive support slots with the likes of Ufomammut, A Storm of Light and Ramesses, before finally arriving at their current formation in 2011 with the arrival of a bass player. During this time they recorded a demo titled ‘Branches In Earth, Roots In The Sky‘, but how widely that circulated is not really very clear so for many people Bast may be a relatively new name, particularly outside of the UK. Back in 2011 after witnessing the band for the first time at the Seven Churches all-dayer in their native Kingston, I wrote “Bast are seriously fucking heavy,” and guess what? That hasn’t changed. Rather, with Chris Fielding of Foel/Skyhammer Studios legend at the desk and all manner of vintage valve amps at their disposal, Bast have gained a considerable amount of clout and on the strength of these recordings, the first produced at Skyhammer Studios, Bast became the first signees to Jon Davis’ fledgling Black Bow Records, with Burning World Records quickly offering to handle things on the continent.

From the first frenetic moments of barnstorming opener ‘In The Beginning‘ to the almost comically stadium-rock ending of breathtaking closer ‘Outside The Circles Of Time‘ Bast are a true revelation on record, just as they are in a live setting. ‘Spectres‘ could be described as a kind of concept album in as much as lyrical themes recur throughout the four songs (the fifth is an instrumental) while feedback physically links the songs to make the album an immersive experience to be best enjoyed as a whole. Musically Bast lean more towards Doom than Black Metal, favouring to break up lengthy, slovenly riffs with emotionally charged hammering which is a dynamic that works beautifully well throughout. Likewise, the band use a loud/quiet dynamic on tracks like ‘Denizen‘ and ‘Outside The Circles Of Time‘ which helps emphasise their exploratory and progressive song writing style.

Needless to say the guitar tones throughout ‘Spectres‘ are a warm, hefty presence and Jon Lee’s drums are thunderous. Guitarist Craig Bryant manipulates feedback to connect his snake-like riffs and provide occasional accents and tension (see the tail end of ‘Denizen‘) while bassist Gavin Thomas provides excellent low-end support, occasionally driving sections along. Bryant’s screams would be best described as gut wrenchingly evil, although not at the sake of being unintelligible, and he generally adopts a slightly less hoarse vocal delivery for most of the songs to allow the album’s narrative to be understood – an allegorical journey along paths “that feet seldom tread” by “flickering candle light” to eventually end up in a land “where the shore is caressed by the sea.” The marriage of the music and lyrical imagery is well balanced, one never allowing the other to become too overblown or pompous to reach the point of pastiche, but instead telling an almost classical hero’s tale. The pacing of the many sections in each of the songs, and the sequencing of the songs themselves, all help to drive the narrative along in a natural manner, penultimate instrumental track ‘Psychonauts’ providing a brief moment of respite in the storm before the band deliver the final blow.

I am going to go out on a limb here and suggest that ‘Spectres‘ is one of the best doom albums by a UK band – and certainly one of the best debuts – of the past few years. While Bast don’t yet have such an unarguably unique sound as bands like Conan, as a piece of work ‘Spectres‘ is impressive in its scope and crafted with as much care and attention-to-detail as Bryant’s wonderful cover art. It’s hard for me to gauge Bast‘s current standing in the UK, let alone internationally, considering this is their first official release, but with UK and European dates planned for 2014 I firmly believe this is Bast‘s year to command and conquer and ‘Spectres‘ is the perfect platform to work from.