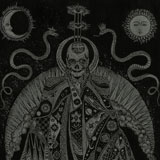 The Departure of Consciousness is the soundtrack to collapse – the slow, final collapse of a dying relationship, the slow cascade of brick and mortar from a collapsing building or the terrifying claustrophobia of the inward collapse of the human mind, all are evoked by the ominously tolling, echoing notes, monstrously thick blast-furnace chords, harrowing screams and bellows and starkly-swinging wrecking-ball percussive bludgeon that is summoned forth by Boston-based quintet Fórn on this, their debut full-length.

When the guitars switch from hollow toll to avalanche of bulldozing filth during the final portion of instrumental opener Emergence, the overwhelming impression is of every last molecule of oxygen being sucked from the room, soon to be followed by every drop of blood in your body. Fierce and utterly suffocating.

As far as debut albums go, this is a hell of a statement.

Last year’s self-titled EP was good, but The Departure of Consciousnessis a whole ‘nother level of pitch black funereal doom metal – note the use of ‘funereal’ as opposed to ‘funeral’, as although Fórn possess the generally glacial pace, cavernous, guttural vocals and serpentine twisted guitar harmonies that characterise funeral doom, they have a rawer, more organic tone than that generally associated with the genre and a propensity for piling on the guitars and filthy bass just when you think things can’t get any heavier.

Dweller On The Thresholdis the first full-on instance of the use of this technique, as a swirling, effected guitar starts up a circular chugging riff, quickly joined by a louder straight-up heavy second guitar playing the same riff and building percussive stabs before the drums start to tumble and pound, and the guitars and bass plunge into a landslide of depraved dirt. Vocalist Chris Pinto hacks and howls cavernously as the track slips between harshly graven chords and sickening harmonies, switching to hellish shrieks as the rhythm temporarily writhes into jackhammering black metal bombast and then back out into snaking, sinuous doom again for the remainder of its length.

Gates Of The Astral Planelumbers and slowly ascends, booming and smashing like the colossal footsteps of Great Cthulhu emerging slobberingly from his tomb at R’lyeh, breaking down into moody guitar, ridiculously distorted bass and a slowly writhing lead that takes us out into the end.

The sepulchral guitar continues into the opening of Alexithmyia, rising and falling chords and deep, deep bass playing off against elegiac lines and throaty, phlegmy vocals. The mood is mournful in the extreme and hovers like a pall across the entirety of The Departure Of Consciousness, right through to final, echoing instrumental Cerebral Intermission.

The ‘quiet/LOUD’ dynamic is certainly not a new one, but Fórn employ it in as jarring and extreme of a way as anyone I’ve heard since Bristolians Sonance, albeit without the post-metal trappings. It’s just when they kick in the distortion, they really kick in.

Darker and rawer sounding than the likes of, say, Asunder, Fórn sit somewhere between those lamented Oaklanders and the Black Metal informed, harsher sound of Burning Witch or Atriarch, which really isn’t a bad place to be at all. It’s also refreshing to see a band not feeling compelled to pen ten minute plus songs or put out an album lasting an hour plus, in fact at just shy of thirty-five minutes I’m actually left wanting more, not a feeling I’m used to at the extreme end of doom these days. You should definitely take that as a recommendation.