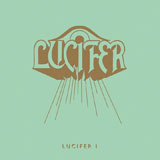 Once there was The Oath. Then it ended and Johanna Sadonis formed Lucifer. Never dropping the pace to a slower one, within a year she comes out with a debut album, which is simply titled Lucifer I. Though the band may not have the ‘2 chicks in a metal band’ factor, that has in no way made this a musically lesser effort.

Before anyone goes on to call that sexist, it’s an easy go-to for certain elements in the metal scene to claim a band is merely drawing interest for the sole reason of having female members. The fact that this effort may easily outshine the works with The Oath, is for me, reason enough to discard that whole matter as nonsense. Anyways, let’s get to what it really is all about here: the music!

There’s a menacing feeling to the opening of ABRACADABRA, which sounds like that old fashioned doom, the way we love and adore it. Maybe a little wink to the good old The Devil’s Blood is in order here too. The lyrics really have a haunting feel to them, which might be due to the addition of Gaz Jennings (ex-Cathedral/Death Penalty) to the bands line-up. Oh yes, surely the comparisons to anything from the early doom days and the obvious occult rock references are in place here. One would be lying not to bring them up, but the sound of Purple Pyramid feels very genuine and honest. The calm chant of Sadonis conjures up a warm but haunting atmosphere, while the riffs slowly flow from your speakers. Magic rock is how the bio describes it, but that’s just creating another little niche. Surely, there’s magic in that anticipatory sound of dark tones though.

Izrael tones down the cascading guitar sounds, to give way to the voice of Sadonis, who’s lulling words put you into a different state. The surge of sound returns on the chorus though. Church bells sound on the heavy hitting Sabbath, which really brings the gloom with it. Soaring above the church tower are the lyrics, while the drum is oddly far away, giving just the heart beat to this track. The song slowly stretches on in a majestic way, paying clear homage to its progenitors. This is the same vein in which White Mountain continues, but adding  a stoner groove to it with spicy guitar riffs with a lot of balls. The singing offers an interesting classy contact with that raw sound and rhythm.

There’s a sense of liberty to way the songs enfold. There’s no real climax, but a continuous tense feeling to a track like Morning Star. At a calm pace the melancholic sounds construct a story with the occasional burst of bass sound and thudding drums. That eerie feeling is gone after the half way mark of the next song, where suddenly the song Total Eclipse picks up the pace, with Andrew Prestidge hitting the drums frantically. That is where the band again grabs the attention, showing some teeth. The lack of some twists and turns makes me doubt if any listener can really stick with this album, though every track is as good as the next. This is one of those moments that shows the formula is still flexible.

The album closes of with the emotional tones of A Grave For Each One Of Us. This track really builds up to a final crescendo for this album. Taking a slow but steady approach from mere fingerpicking, to spiralling guitars and soaring vocals in around 3 minutes. Then the song dwindles down for a final, powerful explosion. Setting the darkened mood again in one final salvo on this great piece of epic doom.

I guess there are some remarks here and there about this record. It may lack a bit of the challenging for me as listener. However, it’s over all a great new start for this group. I guess they are doomed to get a lot of comparisons with those classics though.