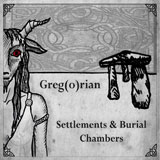 Presumably named after the monophonic chanting style in turn named after a sixth century pope, Greg(o)rian come creeping out of Essex with the intent to scare and thrill with a blend of ambient doom and possibly tongue-in-cheek paganism.

This album takes quite a few repeated listens in order to achieve any sustained impression upon the listener, but after a while the effect is generally a pleasant one for any initiate of doom or black metal. The first track ‘Deep’ is a slow building behemoth that seemingly goes nowhere. The odd whooping scream punctuates the same repeated notes achieving the startling atmosphere of an amateur dramatics production.

For the first half of the track there are no drums, just a faint hint of cymbal. After some considerable time the track segues into a hymn to The Great God Pan, who most probably doesn’t exist, which means it falls on deaf (pointed) ears. Nevertheless, it’s kind of fun, as soft beats on the toms and a mighty throbbing amp fuzz provide a backdrop for a fairly convincing chant intoned in a manner redolent of an actual Gregorian monk, but obviously a twisted one who secretly practises the old ways.

The chanting rises to a faintly humorous crescendo (more amateur dramatics) and then melts into the last track, named after the title of the album, a slow and ominous number that sounds a little like Earth circa ‘Pentastar’ but doomier.

The chant-riddled gloom of this track is livened up by some crazed sub-black metal acceleration that reminds me of both Venom and Bathory, but with rather silly screams. The aim of these three songs is surely to invoke an atmosphere of the same supernatural dread that authors like Arthur Machen and H. P. Lovecraft do so well.

However, I’m not quite so convinced that Greg(o)rian could manage to scare even the frailest child. In classic British horror film terms, this is more ‘Carry On Screaming’ than ‘The Devil Rides Out’. I think the insertion of a ferocious tub-thumping number like ‘War On The Sky’ (from their superior debut release in 2010) would have really consolidated the power and substance of this album but as it stands ‘Settlements and Burial Chambers’ is a curious and interesting recording that straddles a line between camp comedy and absolute seri(o)usness. 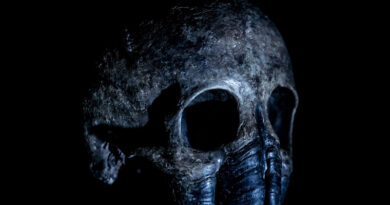