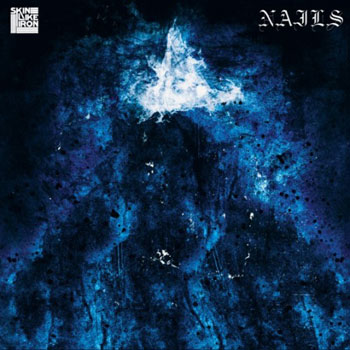 The split 7″ EP between NAILS and SKIN LIKE IRON being collaboratively released by both bands at the end of January, is now streaming in its entirety via Decibel Magazine’s website, RIGHT HERE.

Running the show on side A, San Francisco’s SKIN LIKE IRON have already become a well-known entity in modern hardcore with nearly ten releases on such admirable dissident hardcore labels as Six Feet Under and React Records. The split leads off with two tracks of their melodic, yet abrasive hardcore, boasting an ambitious and emotive energy that many similar contemporary acts lack in severely.

The B-side of this crushing joint venture is owned by NAILS, hailing from Oxnard, California (the same town as the legendary Dr. Know), and undoubtedly one of the most devastating acts within the present expanses of hardcore. As on their Southern Lord debut LP Unsilent Death NAILS get in, kill, and get out, just as fans expect on these two tracks, which are in fact a preview of what is to be expected of their upcoming full-length, now being constructed for release via Southern Lord in sometime in 2012.

The limited one-time pressing of this raging hardcore EP has been manufactured to supply the public with 900 copies on black wax and 100 copies on blue. The artwork was handled by SKIN LIKE IRON’s Alex Capasso who has handled the art duties for previous releases for the band. Preorders for the EP can be found here.

Both NAILS and SKIN LIKE IRON have several upcoming shows this month, including two California record release shows with both bands performing in celebration of the EP’s unveiling; one on January 21st in Pomona and January 28th in San Francisco.