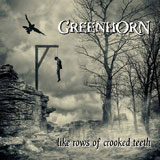 Is there a better feeling of uplifting fulfilment and mystifying wonder in this life than showing up at a stuffy, averagely-attended doom all-dayer and having your head unsuspectingly caved in by an untapped source of musical enchantment? Well, errr… yeah to be fair I can think of a few, but that’s not to say I don’t love discovering a new diamond in the rough all the same and on a sleepy Sunday last March at the Asylum 2 in Birmingham with a packed bill headlined by Conan and Bast, one band stood out from the rest of the pack. Greenhorn were (and still are) a relatively new proposition with their “Dorset Doom” mantra, some intriguing song titles and a fresh, pulverising take on blackened sludge. Blasting into the consciousness with their jarring but all-too-short EPs The Plague Doctor’s Mask (2013) and Doomhawk (2014), Terrorizer were bold enough to state that the South Coast, UK bruisers “may well be the future of British Doom” and based on my first live inspection of the trio, this remains yet to be proven wrong.

EPs are all well and good, but still, you always really want to get your teeth (every pun intended) into a debut full-length right? And so, albeit more than a year since the teasing crunch of Doomhawk, Greenhorn have unravelled Like Rows Of Crooked Teeth upon our volume-ravaged craniums. The trio (bassist/vocalist Sid, guitarist AJ and drummer Vlad, who has since been replaced in the line-up by newbie Mandy) have upped the ante and crafted a sound of furious, yet calculated riffery, that at times sounds as though it’s smouldering upon a bed of rabid snakes. The “step up” if you like of this debut LP from the punchier Doomhawk EP and the demo-only quality of The Plague Doctor’s Mask, is nothing short of admirable and what’s really noticeable is how with just seven tracks, Greenhorn have proven their prowess at mastering a broad number of sub-styles beneath the “doom” umbrella. That Like Rows Of Crooked Teeth was recorded at Skyhammer Studios by Chris Fielding (Bast, Conan, Winterfylleth, Electric Wizard and… he really is a bit good at producing every bloody other decent band going isn’t he?) probably helped a bit too.

The tar-thick chords of the splendidly-titled opener They Said It Was Treason, So They Cut Her Fucking Head Off spread out as if they were stewing in their own juices lined in a gutter of pure sludge hatred. Sid’s guttural rasp cackles across the mix like Dopethrone’s Vincent Houde with a severe chest infection whilst AJ’s riffs lick and curl at the edges of Vlad’s timely percussive stomp. This song trickles, rather than flows and stutters, rather than slides, from first gear to second before regressing back down over and over again, until the tempos ramp and Sid roars down the gauntlet for the closing sixty seconds.

Armed with Conan’s Jon Davis on vocals, Kentucky Boone clatters into the fore like the toxic debris of a deadly collision between Weedeater and Jucifer. Sid’s bass synchs perfectly with the guitar riffs until both cease to sound like two instruments, but instead one throb of pure raging distortion. The tempo is deliberately left varied to allow space to explore Jon’s high wailing range alongside some pounding double-bass kicks and some snail-paced sonic hopscotch. The more up-tempo follow-up cut Long Drop feeds again off those heavy Weedeater comparisons, but via a deliciously sweet and clean solo from AJ and some added vocal beef from Sid, it culminates more in the wheelhouse of Raging Speedhorn or Iron Monkey territories.

The jewel in the crown of Like Rows… however is Witch’s Bridle; a near-eight minute slab of bruising sludge originally culled from The Plague Doctor’s Mask EP. The “remix”, as it were, is however a 100,000% improvement on the original as AJ’s slow, grimacing riffs are slalomed by Sid’s voice – one part deathly growl, one part cleaner, almost Richard Ashcroft-esque matter-of-fact-ness. The song itself transverses many different passages and takes on what it means to truly play “sludge” before opening out into a lethal gallop of a conclusion with some of the most ferocious riffing and brutal drumwork I have heard in quite some time. It’s simply crushing stuff this, and the enhanced production makes it sound like Vlad’s kick-drum is going to gun you down to your death within seconds of its introduction.

Deadman’s Hill’s intro originally reminded me of a more strained take on Queens Of The Stone Age’s Mexicola from the self-titled debut back in ’98, but instead it proceeds to jar and jolt its way through the cog-wheels of aggression like some kind of Bongzilla-meets-very-early-Mastodon hybrid. A grooving, head-banger of a tune but one that’s progressively a little bit of a comedown after the gloriously metallic Witch’s Bridle.

That poisoned, spikey tone of AJ’s returns on the concluding title track. A slow, languishing, churning riff croaks from the speakers and doesn’t really subside for the next eight minutes as samples cackle, cymbals smash and substances are consumed in and around its bullish coil. If you took Bongripper’s blunt repetition and added in the delicious layers of distortion, as favoured by the likes of Slomatics or Indian, then you might come close to the recipe of a track that lives up to its name in its grim-robed atmosphere.

The great thing about the underground heavy music scene of 2015 is that just when you start to think that every band out there is really just the same tired old rehash of Black Sabbath, Pentagram and Blue Cheer, along comes one with some genuine balls and a different set of ideas. ‘Like Rows Of Crooked Teeth has a tone that’s grisly as shit, a bunch of snarling howls about historical executions, some sublime drumwork and a vibe that’ll rock you like five hurricanes, but it’s real strength lies in its change-up of song-structures and its lack of satisfaction in doing the same thing twice. They say it’s grim up North and that the Midlands is the home of true doom, but with that jagged weathered coastline hacking at the sea like rows of crooked teeth, tales of Neolithic history and debut records as crushing as this, its bands like Greenhorn who are one again proving that there’s plenty of glorious misery down south too.